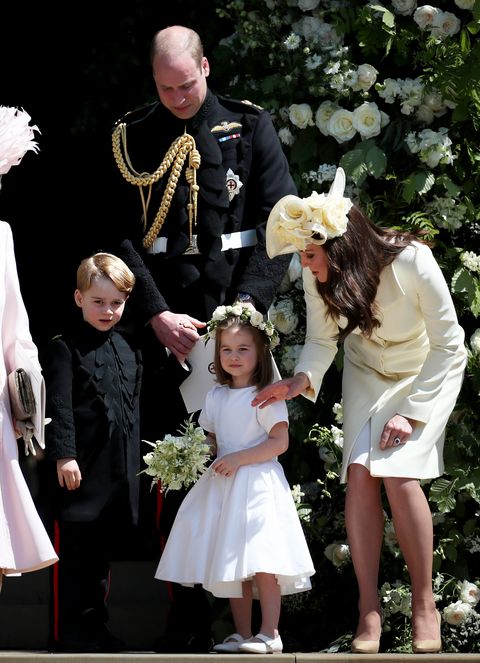 No one does "attention to detail" quite as well as the royal family. Even during their most-watched moments, the royals manage to sneak in tiny details that even the most dedicated royal fans can easily miss. Case-in-point: The detail on Prince George and Princess Charlotte's outfits at Prince Harry and Meghan Markle's royal wedding that we all totally missed.

In one of the cutest decisions of a long list of cute things Harry and Meghan did to make their wedding special, the page boys' coats had their initials embroidered on them in gold thread—a detail that was apparently Harry's idea.

George and Charlotte's outfits are currently on display at the “A Royal Wedding: The Duke and Duchess of Sussex” exhibit at Windsor Castle. In the audio guide for the tour, Harry and Meghan themselves share details about the outfits. In one part, People reports, Harry explains that the biggest challenge of the big day was replicate the embroidery from his coat on the miniature versions worn by the page boys. This audio tour guide is where Harry revealed the detail about the embroidered initials.

“Which was your choice, which I think is such a beautiful keepsake for them," Meghan said of the idea to put the initials on the outfits.

Don't worry though, Charlotte's wedding look had a special touch too. Charlotte's ivory Givenchy dress was paired with shoes by Meghan’s go-to shoe designer Aquazurra. In addition to being by Meghan's fave designer, the shoes' soles were also embroidered with Charlotte's initials and the wedding date.

[H/T: People]
Related Stories
Princess Charlotte Is Obsessed with Fashion
We Got All the Details on Meghan Wedding Tiara
Kayleigh Roberts Contributor Kayleigh Roberts is the weekend editor at Marie Claire, covering celebrity and entertainment news, from actual royals like Kate Middleton and Meghan Markle to Hollywood royalty, like Katie Holmes and Chrissy Teigen.
This content is created and maintained by a third party, and imported onto this page to help users provide their email addresses. You may be able to find more information about this and similar content at piano.io
Advertisement - Continue Reading Below
More From The Ultimate Guide to the Royal Family
Queen's Cousin Accused of Selling Access to Putin
Meghan Wore a Meaningful Necklace for Vax Live
Advertisement - Continue Reading Below
Queen Elizabeth Is Now Selling Beer and Gin
Meghan Markle Wore Carolina Herrera for Vax Live
Princess Charlotte, 6, Tells Everyone She's 16
Meghan Wears Cartier Tank Watch for Vax Live
Meghan Discussed Her Daughter in Vax Live Speech
Prince Harry Talks Digital Pandemic at Vax Live
Harry and Will Have Been Arguing for Months Now
Prince Harry Doesn't Regret His Oprah Interview