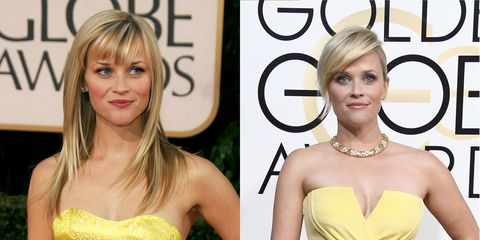 Reese Witherspoon wore a strapless yellow gown to the Golden Globes on Sunday. Yellow has been an incredibly popular color on the red carpet lately, and being Reese, she wore it well.

But the best part about the look wasn't the flattering silhouette or the bright color, it was the fact that it's a reprisal of the dress she wore to the Golden Globes in 2007. The year before, she had won the Golden Globe for best actress in a comedy or musical award for her performance in Walk the Line, and she beamed in her canary Nina Ricci dress and new bangs.

This year, she's back at the awards show as a presenter, wearing what had to have been an intentional reference to her look from 10 years ago. The takeaway? She looked fabulous then and she looks great now. Ageless!