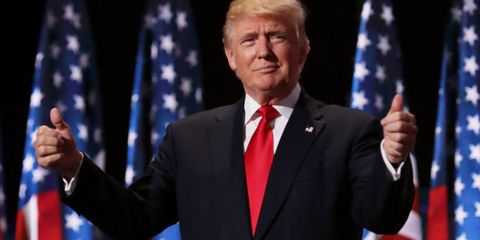 After initially only making comments in an interview with The New York Times, a clearly bruised Donald Trump has now responded to Meryl Streep's powerful Golden Globes speech via Twitter as well.

The President-elect took to the social media site to brand Streep "overrated" and to deny that he ever mocked the disabled reporter in question.

Donald Trump has dismissed Meryl Streep as a "Hillary lover" following her rousing Golden Globe acceptance speech in which she criticized the President-elect.

Trump spoke briefly to The New York Times and admitted that, while he had not seen Streep's bruising comments or, in fact, any of the awards ceremony, he was "not surprised" that he had come under fire from "liberal movie people".

While accepting the Cecil B. DeMille Award at the Golden Globes last night, Streep announced in her impassioned political address: "Hollywood is crawling with outsiders and foreigners, and if you kick us all out, you'll have nothing to watch except for football and mixed martial arts, which are not arts.

"But who are we, and what is Hollywood anyway? It's just a bunch of people from other places."

Streep went on to note one performance that stood out this year; Trump seemingly mocking The New York Times' Serge Kovaleski, a disabled reporter.

"There was nothing good about it, but it did its job," she said of that moment. "It kind of broke my heart when I saw it, and I still can't get it out of my head because it wasn't in a movie; it was in real life.

"That instinct to humiliate when it's modeled by someone in a public platform, it filters down into everyone's life because it gives permission for others to do the same."

Trump vehemently denied "mocking anyone", telling the publication: "I was calling into question a reporter who had gotten nervous because he had changed his story.

"People keep saying I intended to mock the reporter's disability, as if Meryl Streep and others could read my mind, and I did no such thing."

He then added: "And remember, Meryl Streep introduced Hillary Clinton at her convention, and a lot of these people supported Hillary."

Trump ended his interview by insisting that his upcoming inauguration will have "an unbelievable, perhaps record-setting turnout" with "plenty of movie and entertainment stars".

Streep—who didn't mention Trump by name during her speech—went on to receive Tweets of support and praise from fellow Hollywood stars including Anna Kendrick, Sharon Stone and Ellen DeGeneres.

It's since become the most talked-about moment from the Golden Globes on Facebook.