Years after Princess Diana's death, we continue to learn more and more about the beloved royal. A set of six, handwritten letters Diana sent to British Vogue editor Elizabeth Tilberis between 1989 and 1992 reveal not just how much Diana valued the British Vogue team (spoiler: a lot), but personal details about the People's Princess as well—including the time she literally forgot the date of her own wedding anniversary.

The letter in question, dated March 5, 1991, sees Diana discussing the media surrounding her 10-year anniversary with Prince Charles. Unfortunately, she gets the date of that anniversary wrong:

"Alas, I fear that there aren't going to be any photographs released for my birthday in July—there is too much of a build-up towards the 30th & 10 years of marriage ... I do feel terribly that there is far too much of this lady in the media!"

The problem? July 30 was not Charles and Diana's wedding anniversary—July 29 was.

Diana also gushed to Tilberis about her experiences with British Vogue, writing on January 23, 1992:

"I feel very relaxed being with the ladies so thank you for always thinking of me."

"Patrick[Demarchelier, the French photographer who shot Diana for the magazine's December 1991 cover] ... was a dream & I hope he will be happy with the results!"

"The correspondence sheds light on the growing warmth and friendship between the two as they collaborate on various Vogue shoots, detailing how much Diana clearly valued time spent with Tilberis and others," A spokesman for the auctioneers said, according to Express. 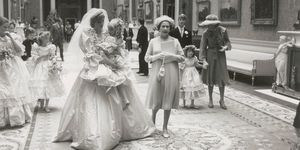 See Rare Photos from Charles and Diana's Wedding
Princess Diana Reportedly Always Wanted a Daughter
Kayleigh Roberts Contributor Kayleigh Roberts is the weekend editor at Marie Claire, covering celebrity and entertainment news, from actual royals like Kate Middleton and Meghan Markle to Hollywood royalty, like Katie Holmes and Chrissy Teigen.
This content is created and maintained by a third party, and imported onto this page to help users provide their email addresses. You may be able to find more information about this and similar content at piano.io
Advertisement - Continue Reading Below
More From The Ultimate Guide to the Royal Family
Meghan Discussed Her Daughter in Vax Live Speech
Prince Harry Talks Digital Pandemic at Vax Live
Advertisement - Continue Reading Below
Harry and Will Have Been Arguing for Months Now
Prince Harry Doesn't Regret His Oprah Interview
Archie Has a Distinct American Accent, Apparently
46 Moments That Changed the Royal Family Forever
A Look Back at Princess Anne's Life in Photos
A Look at Royal Family Portraits Through the Years
Charlotte Looks Like the Queen and Prince William
Charles Shared a Rare Childhood Pic with Philip