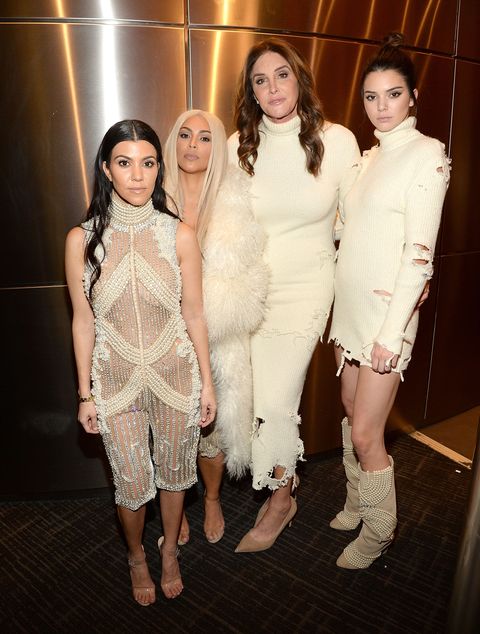 In addition to discussing how radically she's changed after the Paris robbery on Ellen DeGeneres' show this week, Kim Kardashian also clarified her stance on Caitlyn Jenner's infamous tell-all memoir, The Secrets of My Life, that was just released.

The book claims that, among other things, the Kardashians were deliberately left out of Diane Sawyer's first 20/20 special with Caitlyn, that Caitlyn might have come up with the idea of Keeping Up With the Kardashians, and that Kris Jenner had complete control of Caitlyn's finances during their marriage.

"My heart breaks for my mom," Kim told Ellen of the book. "You know, because I feel like she's been through so much and there's, you know, she's [Caitlyn] promoting this book and she's saying all these things and you know, I just don't think it's necessary, you know. And I just feel like it's unfair, things aren't truthful."

Caitlyn's not being honest, Kim furthered. "Not with certain things about my mom and you know, or other things. I mean, I feel like it's taken her a really long time to be honest with herself, so I don't expect her to be honest you know, about my mom now, but it's just so hurtful. Like I just, I wish her all the success in the world, but not at our expense."

Right now, only Kendall and Kylie Jenner have a relationship with Caitlyn. "That's their dad, you know," Kim said. And Kim herself has drifted. "I haven't talked to her in a couple of weeks and I'll always, I mean, I'll always love her," she started. "That was my stepdad for so many years. She taught me about character and so much growing up and I just feel like I don't respect the character that she's showing now. And, but like I said, we, I'll still always have a major love for her, for who she was in my life. I'm really sentimental; I think my mom's that way. And I'll never say…you know, it's still Kendall and Kylie's dad, so I want to be respectful, but I just feel like there's no need for a book. You know, tell your story but just don't bash other people, you know. I just think like it's not tasteful."

On a lighter note, Kim later discussed her children North and Saint West, along with her husband Kanye. Apparently North is really struggling with not being an only child. "She is so jealous. I thought it was a phase," Kim said. "It's not going away. She just says boys aren't allowed in her room. When she's gone at school, I'm like, 'It's time. Let's go in her room. Do whatever you want; go crazy.' She's just so jealous. I can't hold him. I have to stop breastfeeding him. I mean, when I was breastfeeding him, she was so jealous I had to get a little milk box and put it in the other bra with a straw so she would drink, and he would drink. I mean, it was—she's so jealous."

Then the topic changed to Kim's plans for Kanye's 40th birthday party, and Ellen threw out the craziest idea. Kim was into it:

Alyssa Bailey News and Strategy Editor Alyssa Bailey is the news and strategy editor at ELLE.com, where she oversees coverage of celebrities and royals (particularly Meghan Markle and Kate Middleton).
Advertisement - Continue Reading Below
More From Celebrity
Brad Pitt and Jennifer Aniston's Pics, Analyzed
58 Celebrities Who Hated Their Roles
Advertisement - Continue Reading Below
Prince Harry Grins as He Returns to Canada
Meghan Markle Went on a Hike With Archie
Serena Williams Fully Shut Down a Meghan Question
Camilla's Asked Whether She'll Miss the Sussexes
Harry's Speech Sounds Just Like Diana's in 1993
The Queen Is "Very Sad" About Archie Moving
Kim Kardashian Wants to Open Her Own Law Firm
Harry & William Ended Their Feud With Secret Talks