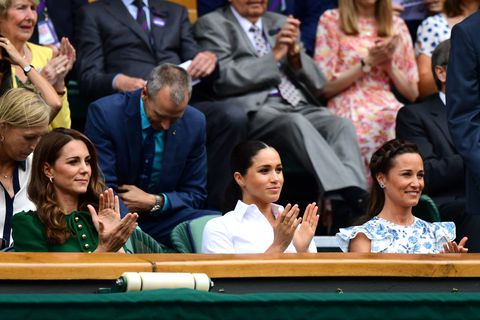 Today, Kate Middleton and Meghan Markle celebrated their public outing-iversy with a trip to Wimbledon.

The duchesses returned to the Royal box at Wimbledon almost a year to the day after their first solo outing together. That first outing was also to see a tennis match at Wimbledon, on July 14, 2018, just a couple of months after Meghan wed Prince Harry and officially joined the royal family.

This year, Kate and Meghan are cheering on the competitors (including Meghan's good friend, Serena Williams) at the Ladies' Singles Final at The Championships.

Kensington Palace confirmed the double duchess outing in a tweet on Friday, writing, "The Duchess of Cambridge, Patron of the All England Lawn Tennis and Croquet Club, and The Duchess of Sussex will attend the Ladies' Singles Final at The Championships, Wimbledon on Saturday 13th July." Kate's sister Pippa was also in attendance.

The Duchess of Cambridge, Patron of the All England Lawn Tennis and Croquet Club, and The Duchess of Sussex will attend the Ladies' Singles Final at The Championships, Wimbledon on Saturday 13th July. #Wimbledon pic.twitter.com/8N8qa36nM6

All three ladies looked stunning. Kate chose an emerald green Dolce & Gabbana dress, and it's definitely her color. Meanwhile, her sister-in-law Meghan went with a white button-down and a beautiful pleated Hugo Boss Vesplisa midi skirt. (Shop it here while supplies last.) Kate's sister, Pippa, wore a floral-printed dress with ruffled sleeves and the most perfect side-braid in her hair.

The sisters were all smiles at Wimbledon.
Getty Images

Last year, Kate and Meghan watched Serbia's Novak Djokovic play against Spain's Rafael Nadal during the continuation of their men's singles semi-final match on the twelfth day of the 2018 Wimbledon Championships.