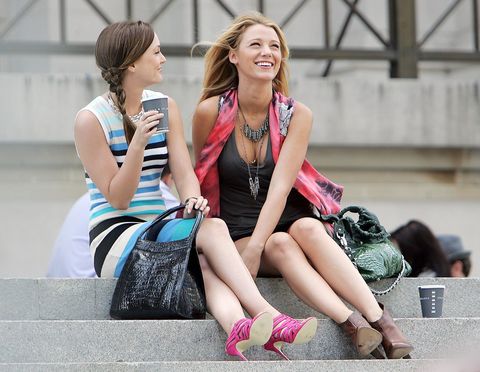 In news that will make you feel very old, Gossip Girl's pilot aired September 19, 2007. In honor of this 10-year anniversary, Vanity Fair did a fascinating reflection piece with the cast (except Penn Badgley, AKA Dan Humphrey, who declined to be interviewed like a true Lonely Boy). You should read the whole thing here, but below, the juiciest tidbits. 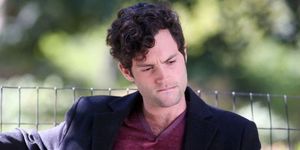 1. Co-producers Josh Schwartz and Stephanie Savage were inspired to seek out Blake Lively for Serena van der Woodsen because online message boards showed fans of the book series fantasy-cast her in the role. "We didn't see a lot of other girls for Serena," Schwartz said. "She has to be somebody that you believe would be sitting in the front row at Fashion Week eventually."

2. Lively was about to quit acting and enroll in college (she had deferred the year before) when she was offered the role. In fact, she tried to decline the part when it was first offered, but they tricked her into taking it. "I said, 'No, I want to go to college. Thank you, though,'" Lively recalled. "Then they [Schwartz and Savage] said, 'Okay, you can go to Columbia [University] one day a week. After the first year [of the show], it'll quiet down. Your life will go back to normal and you can start going to school. We can't put it in writing, but we promise you can go.' So that's why I said, 'Okay. You know what? I'll do this.'" Of course, things didn't actually quiet down. "This is advice to anyone: When they say, 'We promise, but we can't put it in writing,' there's a reason they can't put it in writing. But no, the show didn't slow down. It just got more and more."

3. Leighton Meester first auditioned for Serena, but told producers she felt she was a better fit for Blair Waldorf.

4. Meester wanted the part of Blair so badly she dyed her hair for it. "She came in and she was really funny, and really smart and played vulnerable. But there was one problem: She was blonde," Schwartz said. "And Blake was blonde, obviously; Serena had to be blonde. So, [Leighton] went to the sink and dyed her hair. She wanted it.'"

5. The first time Chace Crawford (who played Nate Archibald) met Meester, he couldn't see her as Blair. "[I thought] I just don't see her as Blair Waldorf. I can't see it." Then Meester turned "slyly in her chair" with Blair's iconic headband and went into character. That sold Crawford. "I just remember thinking, 'That girl can act. She's the perfect girl for this.'"

6. Meester didn't think Gossip Girl would become the phenomena it did. "I think it was just the normal, typical pilot season audition for me," she recalled. "I auditioned and then I tested once and then we did a screen test with everybody. And then, that was it….I dunno. I got it."

7. …but Lively knew it'd be the end of her anonymity. "I'm actually a very shy person and the idea of losing my anonymity was one that was scary to me," she said. "I remember saying when I read this script, 'Whoever does this will not be able to walk out of their house ever again and be the same as before they started this.' You could tell it was a cultural phenomenon. That was both exciting and thrilling, but also very scary."

8. Ivanka Trump and Jared Kushner made a guest appearance on the show "for the money," Schwartz said, with a laugh, per VF. They were in a club scene filmed at the Boom Boom Room. 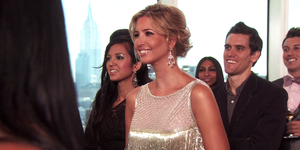 9. At one point, seven or eight years ago, Gossip Girl was the most illegally streamed show in China, then-CW president of entertainment Dawn Ostroff was told by Chinese executives.

10. Crawford and Ed Westwick (Chuck Bass) were actual roommates in a two-bedroom apartment in Chelsea when they filmed the show.

12. Even before the pilot even aired, Westwick and Crawford were being hounded by girls. "We had these girls coming up to us [at an Arctic Monkeys concert], and they were kind of freaking out about it: 'Oh, we love the books.' [Ed and I] kept looking at each other like, shit, man."

13. Fans and paparazzi started tracking the Gossip Girl set when they were shooting, and it really was insane. "I opened up my trailer door to see, literally, on my first day, I think 40 paparazzi," Michelle Trachtenberg (Georgina Sparks) said. "That's when I was like, 'Okay, I need my own bodyguard.'" Meester had this quip about the girls who came around: They weren't there for her or Lively; "I think they were mostly there for the guys."

14. Gossip Girl really did have a profound effect on retail—but designers were much more interested in it after the first season. "When we came back with season 2, so many designers were lining up and wanting to be a part of it—they wanted their stuff on either Blake or Leighton," costume designer Eric Daman said.

15. Multiple men told Zuzanna Szadkowski (who played Blair's righthand maid Dorota) that they watched the show to get girls. "A guy coming up to me who had a suit and a briefcase, this total Wall Street Guy, and he was all like, 'Oh my god, Dorota!' He told me—and a couple of other guys have told me this, too—that they used to watch the show because it was a great way in with the ladies."

17. But the girls weren't friends either, writer/co-producer Joshua Safran said: "Blake and Leighton were not friends. They were friendly, but they were not friends like Serena and Blair. Yet the second they'd be on set together, it's as if they were."

18. Meester was reserved on set. "[She] was very removed and very quiet, and, after her scenes were done, she would wander the stage," Safran said. "I had this image of her just in these gorgeous dresses with a book in her hand, sort of a little bit out of focus out in the corners."

19. Lively was more extroverted. "Blake is very much in the moment," Safran said. "Blake knows what's happening. She knows this movie's coming out, this band is happening. You talk to Blake on a very contemporary level, and she would be like, 'I'm doing this thing tonight. Have you been to this restaurant?' "

20. Lively and Penn Badgley (who played Dan Humphrey) were so good at keeping their relationship private that people had no clue they broke up for months. "The shocking thing was, I found out on the set of the season 2 finale that Blake and Penn had broken up months before," Safran said. "They kept the breakup hidden from the crew, which you could never do now. I don't even know how they did it. They kept it from everybody which is a testament to how good they are as actors. Because they did not want their personal drama to relate to the show."

21. Lively was initially afraid of her bosses finding out too much about her relationship with Badgley—until she realized they wanted the cast members to date. "I remember there was one point where we were just afraid of how our personal lives overlapping our work life could be perceived by our bosses," Lively said. "[But then] we were like, 'Oh no, that's exactly what they want.' They wanted us all to date. They wanted us all to wear the same clothes that we're wearing on the show. They wanted that, because then it fed their whole narrative. People could buy into this world."

22. Badgley was not into being on the show. "Penn didn't like being on Gossip Girl, but…he was Dan. He may not have liked it, but [his character] was the closest to who he was," Safran said.

23. When Lively was dating Leonardo DiCaprio and shooting the series, she'd take photos of a doll to document where she was and send them to him. "When I think about shooting the L.A. episodes, Blake was dating [DiCaprio] at the time, and she had this thing where she had a doll that she took photos of that she sent to Leo," Safran said. "Blake was way ahead of the curve. It was pre-Instagram. She was documenting her life in photographs in a way that people were not yet doing."

24. There was a Russian hack on Gossip Girl. "All season, our scripts were ending up online, and we couldn't figure out how," a producer on the series told VF. "We hired a private investigator. We didn't understand what was happening, because everything was getting leaked, every detail. …A teenager, I think either [from] Russia or Bulgaria, had hacked one of the writer's e-mails, and was selling scripts on eBay. But they were underage, so they couldn't be prosecuted. It was a fucking production nightmare. We would have to 'X' out every script. We would have to print on red paper...It was like there was a 'Gossip Girl' in our system."

25. The show's actual Gossip Girl, by the way, was never going to be a girl, but both Nate and Eric van der Woodsen, Serena's brother, were considered by the writers as possible real identities of the blogger earlier on.

26. Westwick still doesn't know who Gossip Girl is (spoiler: it's Dan). "I still am not sure who GG was lol," he wrote VF in an email.

27. Lively and Meester was open to a reunion—though Lively is more open than Meester. "I guess I hear that [reunion talk] in fits and starts here and there, but it's hard to say," Meester told VF. "If everyone was into it and if the timing was right, you know?" She trailed off, "I don't want to say, 'No, never…'"

Lively, conversely, said: "Of course. I'm open to anything that's good, that's interesting, and that sort of feels necessary. …I imagine we all would [consider it]. I can't speak for everyone else, but we all owe so much to this show, and I think that it would be silly not to acknowledge that."

Schwartz and Savage are game too: "[We] could be persuaded [to revisit the world of Gossip Girl] if there were new stories to tell."

Alyssa Bailey News and Strategy Editor Alyssa Bailey is the news and strategy editor at ELLE.com, where she oversees coverage of celebrities and royals (particularly Meghan Markle and Kate Middleton).
This content is created and maintained by a third party, and imported onto this page to help users provide their email addresses. You may be able to find more information about this and similar content at piano.io
Advertisement - Continue Reading Below
More From Celebrity
What Happens on Katie's Season?
Rebel Wilson Recreated This Britney Spears Look
Advertisement - Continue Reading Below
Jennifer Lopez Flew Back From European Getaway
Jennifer Lopez Wears Old Bracelet From Ben Affleck
Simone Biles Cheers on MyKayla Skinner
See the Royals Socialize at a 1991 Cocktail Party
Eugenie Posts Pics from Harry & Meghan's Home
Queen Trolled Tourists Who Didn't Recognize Her
Blake and Ryan Recreated Their First Date on IG
Charles Expertly Ignored Boris Johnson's Snafu