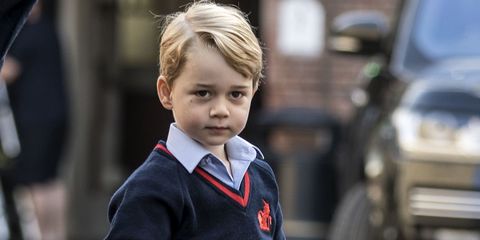 Prince George is settling into school life, but it's unlikely he'll be called by his royal title by his teachers and reception classmates.

Following recent speculation over the young prince's surname as he starts his education at Thomas' Battersea, Kensington Palace has confirmed the four-year-old will be known as George Cambridge.

This makes a lot of sense, given that his official title is Prince George of Cambridge and his parents are the Duke and Duchess of Cambridge. It also suggests William and Kate are keen for their son to be treated in the most normal way possible as he grows up. 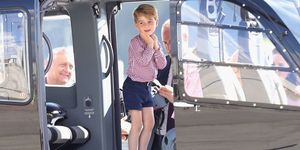 "Unless The Prince of Wales chooses to alter the present decisions when he becomes king, he will continue to be of the House of Windsor and his grandchildren will use the surname Mountbatten-Windsor."

For a more detailed explanation of why George and Charlotte won't need to use their surnames at school anyway, read here.

Although a surname isn't necessary, both Prince Harry and Prince William have chosen to do so in the past. When they joined the army, they went by the names of Harry Wales and William Wales respectively, because their father is the Prince of Wales.

But this is where it gets complicated. This means that when Prince Charles becomes king, it is likely Prince William will follow most heirs apparent in history and inherit the title Prince of Wales. So eventually, George might be a Wales one day, too.

Katie Frost Senior Editor Katie Frost is Deputy News Editor in the Newsroom, covering lifestyle, travel, food, celebrity and royals-related content.
This content is created and maintained by a third party, and imported onto this page to help users provide their email addresses. You may be able to find more information about this and similar content at piano.io
Advertisement - Continue Reading Below
More From Celebrity
Jennifer Lopez on Learning to Love Herself
The Queen May Honor Kate Later This Year
Advertisement - Continue Reading Below
Olivia Wilde & Harry Styles Keep It Profesh on Set
Prince Harry on How Tabloid Attacks Changed Him
Watch Orlando and Katy After Her Performance
Kate Middleton Debuted Long, Straight Hair
Prince Harry's Surprise Inauguration Appearance
Chrissy Teigen Shared a Cute Tom Hanks Story
Gigi and Zayn Finally Reveal Their Daughter's Name
Rihanna Takes Out the Trash on Trump's Last Day