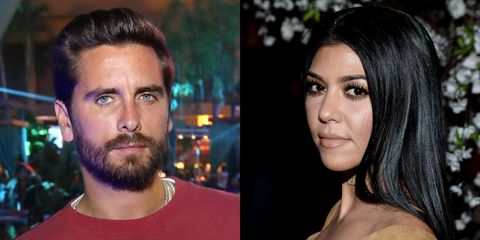 Keeping Up With the Kardashians is celebrating 10 years and a whopping 310 episodes on the air (take a second to process that). To celebrate the momentous occasion, E! just aired a 10-year anniversary special/retrospective/therapy session between Ryan Seacrest and the Kardashians.

Ryan held nothing back when it came to addressing Kourtney and Scott Disick's long-running, on-again, off-again relationship. They, for the record, don't seem to be totally on the same page about their future.

The short version: Kourtney insists they're over over and Scott says he's still in love with her and kind-of, sort-of pursuing her. The other Kardashians also don't seem to buy that the romantic relationship is truly over, even though Kourtney and Scott have been platonic for two years.

Kourtney on their relationship:

"We're coparenting our kids and just trying to get along."

Scott on their relationship:

"She's the only person I've ever loved in my life."

And Scott (kind of?) joking:

Kourtney, again, trying to convince everyone in the room that she's really moved on:

"The debauchery that has gone one has definitely closed the door several billion times."

Then, Scott claimed that Kourtney loses interest in him every time he's a good person because the person she fell in love with was a little "f*cked up." So, you know, ten years later and at least Scott Disick has stayed the same.

Watch the whole segment if you really feel the need below: