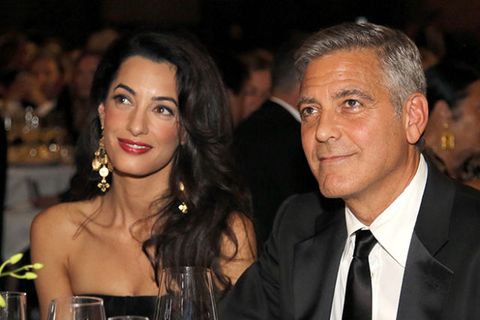 Amal Alamuddin's perfect wedding weekend outfits have long since been sent to the dry cleaners, while the Venetian boats that shuttled Matt Damon, Emily Blunt, and Cindy Crawford to the Alamuddin-Clooney nuptials are now back on the grind, ferrying Regular Old Tourists. Harumph. But once again, the Alamuddin-Clooney marriage is back in the news, because Alamuddin is no longer Alamuddin. Yesterday, the 36-year-old's profile page on her law firm website was updated to display that she's changed her name:

Obviously, the site's crashed since then, so there shouldn't be any more to read here than a blank page that says 504 Gateway Timeout. To explore the matter further, you'll have to go to the rest of the Interwebs, where "Everyone is losing their minds," in the words of The Guardian's Eleanor Robertson. It's a touch hyperbolic, though really not that far off from the truth. As ELLE UK sums it up, "Whether or not you take your husband's name is one of the big feminist dilemmas," and some people are unhappy with Mrs. Clooney's decision.

Now, just as people gave Amal the mantle of Strong, Feminist Woman because she has a great job and remained single until 36, they're suddenly stripping it from her, as if having enthusiasm for marital traditions is somehow anti-feminist. (You have "lost your marbles," writes one woman in an open letter; you are "doing the world a disservice by demonstrating that even very powerful and successful women are still less important than the men they marry," writes another.) Yet even as someone who doesn't plan to change her name when she gets married, I don't think that's fair. I do think it's fair—or at least understandable—to feel a twinge of disappointment. You can be a feminist and change your name (we're all bad feminists anyway, aren't we?). Still, these facts get me down: Women keeping their maiden names is not just a rare phenomenon but a decreasing one.

A fairly comprehensive 2011 study (19,000 people) by TheKnot.com put the number of married U.S. women who keep their maiden names at just 14 percent, a number that's been dropping significantly since the '90s. Keeping maiden names surged in the '70s and '80s, and then, poof, it's been a vanishing trend. And just as Amal will surely spawn a zillion off-the-shoulder wedding gowns, I guess I'd hoped she'd keep her name and maybe inspire some more women to make a similar choice—or at least pull a Beyoncé (slash Beyoncé Knowles-Carter). But that's just me. As for what Mrs. Clooney is doing about all this? She's busy advising the Greek government in its fight to repatriate the Parthenon marbles from Britain.