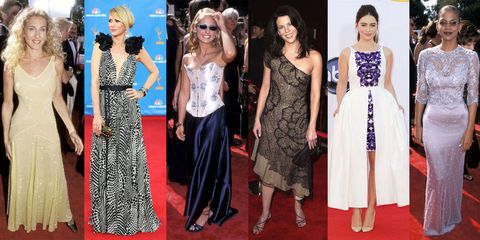 The 68th Primetime Emmy Awards are this Sunday, so we're looking back at what our favorite stars wore their very first time out. Prepare for some funny, impressive, oh-that's-so-her stuff.

Jones attended the Emmy Awards for the first time in 1990 when she was just 24, with her mom, Peggy Lipton. She wore an oversized brown suit and a criss-crossed white blouse...which it's fair to say we'll never see the likes of on a red carpet again.

Clarke (AKA Khaleesi) walked the Emmy Awards red carpet in this purple and white dress in 2012.

Jennifer Aniston wore a classic black dress when she walked the Emmys red carpet with her Friends costar, Matthew Perry, in 1995.

Schumer wore this dark teal dress when she won an Emmy in 2015 for Outstanding Variety Sketch Series for Inside Amy Schumer.

Janney wore a knockout gold dress when she won the Emmy for Outstanding Supporting Actress in a Drama Series for her role on The West Wing in 2000.

Plaza walked the Emmy red carpet in a beautiful white gown in 2011.

Cox walked the Emmy red carpet with her then-boyfriend Paul Brown (and a shawl) in 1987.

Kudrow wore shades and a gold dress to the Emmy Awards in 1995.

Flockhart was pretty in pink on the Emmy carpet in 1998.

Buffy herself was the epitome of cool at the Emmy Awards in 1998. Also: shades, man.

Crawford attended the Emmy Awards with Jason Priestley in 1992, when hats and bustiers were all the rage.

Applegate wore all-black and big bangs to the Emmy Awards in 1989.

DeGeneres wore a simple pantsuit to the Emmy Awards in 1994.

Zimmer glowed with a full baby bump and a red satin dress at the Emmy Awards in 2007.

Hannigan wore this pretty beaded number to the Emmy Awards in 2005.

Williams looked adorable in this pink gown at the 2015 Emmy Awards.

Cersei Lannister would approve of this beautiful black gown Headey wore to the 2011 Emmy Awards.

Messing looked elegant on the red carpet for the Emmy Awards in 1999.

Kemper wore this green, rose-patterned gown to the Emmy Awards in 2009.

Hoffmann looked stunning in a burgundy ensemble at the 2015 Emmy Awards.

From her embellished dress to her curly updo, everything about Anderson's 1996 Emmy look screamed "the '90s."

Huffman showed off her impressively-toned arms at the 2003 Emmy Awards red carpet.

Krakowski wore this very fitted (and very shiny) blue gown to the Emmy Awards in 1999.

Rodriguez did not look like an Emmy carpet virgin when she wore this stunning gown in 2015.

Berry made a statement with this detailed dress at the Emmy Awards in 1998.

Chlumsky has been nominated four times for her hilarious role on Veep, and she looked like a true winner on the Emmy carpet in 2012.

The Veep star wore this black dress to the Emmy Awards in 1992 when she was nominated for Seinfeld.

Washington wowed in this red dress at the 2011 Emmy Awards.

Next
14 Coco Chanel Quotes Every Woman Should Live By 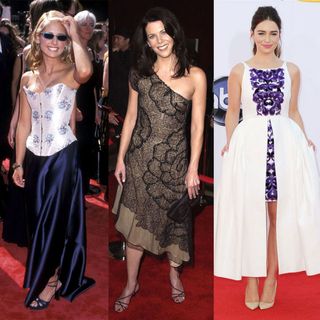 Advertisement - Continue Reading Below
Kayleigh Roberts Kayleigh Roberts is the weekend editor at Marie Claire, covering celebrity and entertainment news, from actual royals like Kate Middleton and Meghan Markle to Hollywood royalty, like Katie Holmes and Chrissy Teigen.
This content is created and maintained by a third party, and imported onto this page to help users provide their email addresses. You may be able to find more information about this and similar content at piano.io
More From Celebrity
A Brief History Lesson on Brad and Jen
Rihanna and A$AP Were Spotted on a Date
Advertisement - Continue Reading Below
Prince Harry Is "Really Missing" Meghan Markle
J.Lo and A-Rod Are "Completely Back On"
Chrissy Shared the Cutest Photo of Luna and Miles
Gaga Stuns in a Wedding Dress for 'House of Gucci'
Prince Harry Is Quarantining at Frogmore Cottage
Meghan Markle Expresses Sympathies to the Queen
Prince Harry Remembers Prince Philip
Prince William Statement on Prince Philip's Death