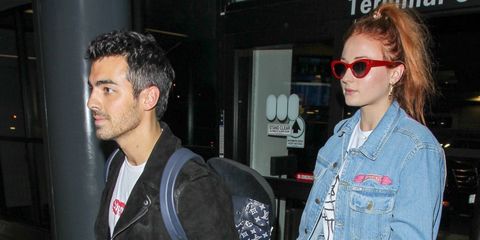 Just as Selena Gomez loves wearing The Weeknd's tour merch, Sophie Turner can't help but support boyfriend Joe Jonas' band with her clothing choices. Arriving at the airport in Los Angeles this week, alongside Jonas, Turner wore a denim jacket with a familiar slogan on it.

Emblazoned in pink on the back of the jacket is the slogan, "Kissing Strangers," which just so happens to be the name of DNCE's most recent single. Clearly, Turner is a big fan of her boyfriend's music, and that extends to wearing his merch, which is pretty sweet.

Turner is currently appearing at Comic-Con to promote Season 7 of Game of Thrones, and continues to say the cutest things about the Jonas brother. In an interview with Entertainment Tonight, Turner called her boyfriend, "a good accessory," in reference to his appearance on the red carpet alongside her. The couple clearly enjoys co-ordinating with one another.