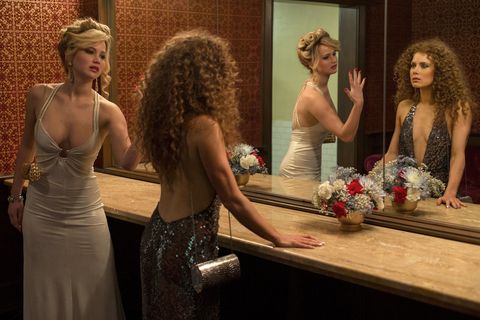 A massive hack of Sony's computer systems led to email leaks that have turned Hollywood upside down. Hackers, who call themselves the Guardians of Peace, have revealed executives' nasty emails about Angelina Jolie and racist jokes about President Obama, among other things. Now, The Daily Beast reports that hacked emails reveal a gender pay gap in the movie American Hustle.

Stars Christian Bale, Amy Adams, Bradley Cooper, and Jennifer Lawrence all were nominated for Oscars for their performances. But the male stars, including supporting actor Jeremy Renner, seem to have been paid more than their female costars.

In an email from last December, top executives discuss the number of "points" each star would get from the movie. (Points refer to money received after the movie comes out, based on how well it performs at the box office.) The first email notes there were complaints that the male actors each got 9 percent while the female actors got 7 percent. (Lawrence only got 5 percent at first, but then got bumped up to 7 percent, tied with Adams.)

Amy Pascal, the co-chair of Sony Pictures Entertainment who has been one of the hackers' primary targets, responded to the complaints with "there is truth here." It's unclear whether the percentages got balanced out at the end. Regardless, this disparity is yet another example of the gender pay gap as well as the lesser value Hollywood places on its actresses compared to its actors. Even major movie stars have trouble getting equal pay for equal work.