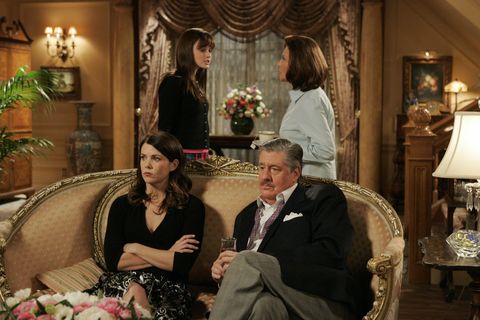 Actor Edward Herrmann, 71, had been battling brain cancer, and died today in a New York hospital, surrounded by family.

If you're as misty-eyed as I am about the loss of one of the best TV dads ever, prepare yourselves: Apparently he was the same person in real life as he was on the show.

"Edward Herrmann, besides being an accomplished actor, was a true gentleman and a scholar, as well as being an incredibly kind and decent man," his manager, Robbie Kass, told TheWrap. "He will be sorely missed."

Cue up the Netflix reruns...

The Absolute Best TV Shows from the Early 2000s

The 15 Most Iconic TV Wardrobes

Jessica Pels Editor-in-Chief As the editor of Cosmopolitan, Jess oversees the editorial for all of Cosmo's efforts across print, digital, video, and emerging platforms.
This content is created and maintained by a third party, and imported onto this page to help users provide their email addresses. You may be able to find more information about this and similar content at piano.io
Advertisement - Continue Reading Below
More From Celebrity
Jennifer Lopez and Ben Affleck: Everything We Know
Harry & Oprah's Mental Health Doc Has a Title
Advertisement - Continue Reading Below
Serena Williams Might Miss the Tokyo Olympics
Jennifer and Ben Have "Unreal" Chemistry Together
The Sussexes Marked Archie's Bday in a Lovely Way
Queen's Cousin Accused of Selling Access to Putin
Meghan Wore a Meaningful Necklace for Vax Live
How Celebrities Are Celebrating Mother's Day 2021
Gabrielle and Kaavia's Mother's Day Pic is So Cute
Ben Affleck's Moving Tribute to Jennifer Garner