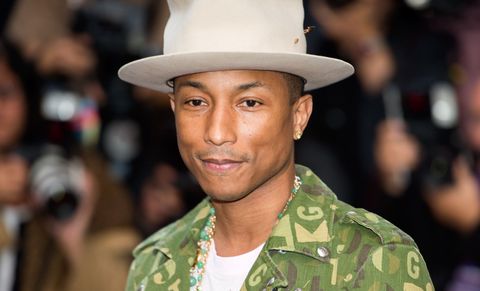 It might seem crazy, what we're about to say: Pharrell is becoming an author. (Do you see what we did there?) Based on his major hit by the same name, the performer will be releasing a picture book titled Happy that will feature images of children around the world "celebrating what it means to be happy."

According to Digital Spy, Pharrell signed with Putnam Books, who will produce around 250,000 copies. Happy will be released on September 22.

The catchy track, which was included on the Despicable Me 2 soundtrack, became a worldwide phenomenon, landing Williams two Grammys and an Oscar nomination—and a permanent spot on our Songs We Can Never Get Out of Our Heads list.

Pharrell and Karl Lagerfeld Are Collaborating on a Chanel Film

Cara Delevingne Is Reportedly Recording a Single With Pharrell Williams

Gwen Stefani Is Collaborating With Pharrell On Her New Album

Samantha Leal Senior Web Editor I'm Sam, the senior editor at MarieClaire.com.
This content is created and maintained by a third party, and imported onto this page to help users provide their email addresses. You may be able to find more information about this and similar content at piano.io
Advertisement - Continue Reading Below
More From Celebrity
How Celebs Are Celebrating Thanksgiving This Year
Harry and Meghan Can't Comment on 'The Crown'
Advertisement - Continue Reading Below
Charles & Will Supported Harry After Miscarriage
All the Black Friday Sales Royal Fans Need to Shop
Meghan's Mom Is Helping Her Heal After Miscarriage
Celebs Reveal Their Worst On-Screen Kisses
Duchess Kate Looks Stunning in a Pink Suit
Chrissy Defended Meghan's Miscarriage Op-Ed
Diana's Friend Shared a Rare Pic of Her on a Yacht
John Shared a Cute Pic of Chrissy, Luna, and Miles