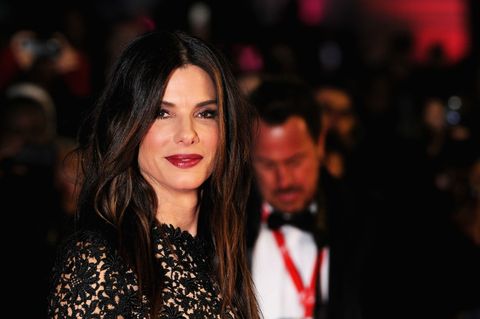 Like former boyfriend (did you forget?) Ryan Gosling, "real, radiant" Sandra Bullock is an attractiveness denier, except not so much that she'd refuse People's World's Most Beautiful title, which she officially won today.

Upon hearing the news, Bullock, 50, told People she thought it "ridiculous" and kept it to herself...until her interview, in which she explains her formula for real beauty: "Be a good person, be a good mom, do a good job with the lunch, let someone cut in front of you who looks like they're in a bigger hurry. The people I find most beautiful are the ones who aren't trying."

Previous WMB winners include Lupita Nyong'o, Gwyneth Paltrow (at 40), Beyoncé, and Jennifer Lopez, and, this year, Laverne Cox is included in the magazine's "192 other breathtaking beauties." So yay diversity! We've sure come a long way from the 1990s.

Ryan Gosling is In Denial About His Sex Appeal

Chelsea Peng I'm Chelsea Peng, the assistant editor at MarieClaire.com.
This content is created and maintained by a third party, and imported onto this page to help users provide their email addresses. You may be able to find more information about this and similar content at piano.io
Advertisement - Continue Reading Below
More From Celebrity
The Queen Has a Rule Against Bad Talking Family
The Queen Took a Pic of Philip With Her to Funeral
Advertisement - Continue Reading Below
The Queen's Tolerance Was the Key to Her Marriage
J.Lo "Likes" Shady IG Post After A-Rod Split 👀
Beyoncé Shares Photos of Her White Power Suit
Will & Kate Welcomed Harry Back Into Their Group
Queen Left a Handwritten Note on Philip's Coffin
The Queen Said Grief Is the Price We Pay for Love
All of the Photos from Prince Philip's Funeral
The Queen Wore This Brooch to Philip's Funeral