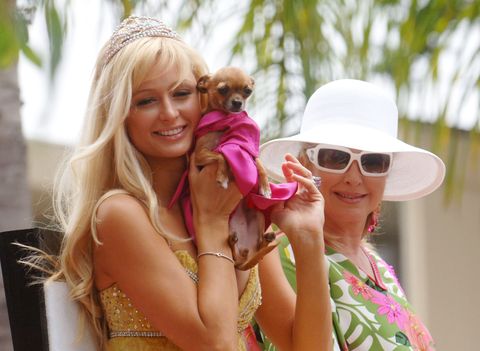 Tinkerbell Hilton, who survived scratchy, skirted outfits and kidnapping attempts to become the preeminent Chihuahua of our time, died Wednesday. She was 14.

Ms. Hilton began her career as a shriveled, bleary-eyed hand ornament, but soon rose to prominence as the universe's first canine reality star. On The Simple Life, she charmed audiences as large as 13.3 million viewers with her sweet personality, commanding stage presence, and unique sense of style best described as a cross between Bernini and Donatella Versace.

Her survivors include her mother Paris, who raised her as a single parent, and various backup pets, including a Pomeranian, a kitten, and a ferret.

10 Things No One Ever Tells You About Owning a Dog

Chelsea Peng I'm Chelsea Peng, the assistant editor at MarieClaire.com.
This content is created and maintained by a third party, and imported onto this page to help users provide their email addresses. You may be able to find more information about this and similar content at piano.io
Advertisement - Continue Reading Below
More From Celebrity
Spice Girls Reunion Tour Might Feature Posh Spice
Prince Charles' Revealing Joke About the Throne
Advertisement - Continue Reading Below
Some People Think Prince Harry Sounds American Now
Prince Charles May Make Buckingham Palace a Museum
Chrissy's Daughter Luna Is Learning to Read
The Queen Spent a Night in Hospital
Kate and Will Made Emma Watson Crack Up
Blake Lively Called Out an Instagram Account
Khloé and Tristan Have "No Label" Right Now
Kate and Will Share Intimate Moments in New Photos