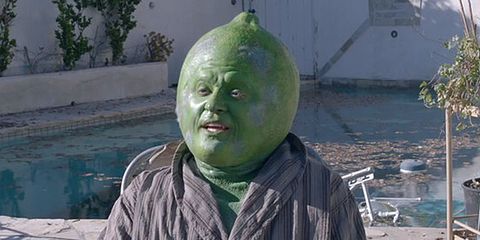 You're probably already stocking up on spirits for your after-work drink fest tomorrow (it's Cinco de Mayo, in case you forgot) and, like clockwork, Justin Timberlake just released his newest (and probably most creative) promo for his tequila brand Sauza 901.

In the video Timberlake plays Rick "Sour" Vane, a melodramatic lime recounting the story of his rise to fame and tragic fall from grace.

Vane reminisces on the glory days of the limes. "It was like you couldn't drink tequila without one of us," he says. "Literally. It was like we were rockstars."

But like all 15 minutes of fame—it had to end. Once Sauza 901 is introduced, people begin tossing their limes. There's no use for Vane anymore.

Vane is decidedly emotional after admitting he hit "rock bottom," but after many mirror pep talks he's hopeful about his comeback.

Before the close of the video, Vane does confess he's tasted his enemy, and has only two words to describe it: "Really good."

Awwww: The First Picture of the Timberbaby Has Been Revealed