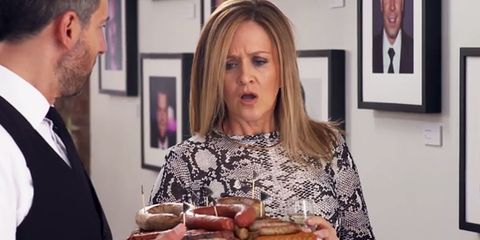 We've all been talking for what seems like forever about how annoying it is that late-night TV is such a boys' club. But none of us have done it nearly as hilariously as former Daily Show correspondent Samantha Bee.

The comedian is getting her own late-night show on TBS, and isn't afraid to highlight what makes her different from the competition. In the first promo for the show, we get a taste of her fearless, amazing, much-needed approach. It is awesome. You will love it.

Standing in what looks like an art gallery setting, Bee stares at a wall of headshots of late-night's current hosts (conspicuously absent, it should be noted, is new TBS coworker Conan O'Brien. Awk-ward!). "When I take a look at each piece individually, I like it, but when I take a step back, I feel like something's missing," she says. And then, of course, a waiter offers her a gigantic plate full of sausages. "I think I'm kinda done with sausages," she quips.

Bee's show, which hasn't announced a title, will debut later this year, according to The Hollywood Reporter. What about now? Can we have it now?