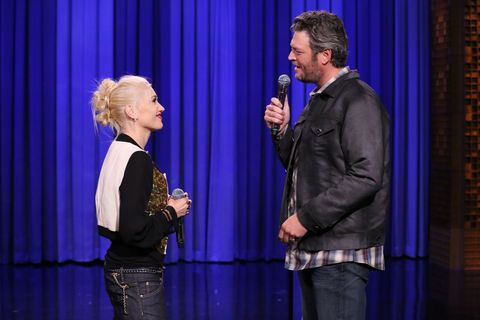 Update, 11/7: Just three days after Gwen Stefani's rep confirmed that she and her Voice co-judge Blake Shelton are *indeed* an item, the "Used to Love You" singer has broken her silence about their budding romance.

"He's a pretty rad guy, I have to say that," Stefani told #Uncorked hosts Leigh Ann and Courtney from Dallas/Fort Worth radio station 103.7 KVIL, according to ET.

"There's been loads of people that have helped me with this tragedy," she added, referencing her divorce from Gavin Rossdale. "There's definitely key people that have pointed me into the right direction. Blake really helped me."

Whether or not this is just a rebound relationship (sorry, G, that's just how it sounds!), at least everyone will get a good ol' "mid-tempo country ballad" out of it.

Original story, 11/4: After rumors that the two were dating and super grainy pictures that sorta, maybe confirmed it, Gwen Stefani's rep has *truly* made it clear: The two Voice co-judges are together.

"Gwen and Blake are longtime friends who have very recently started dating," Stefani's spokesperson told Us Weekly. He/she would not go on, but really, what else needs to be said?

"They've been supporting each other through a difficult time and they're really happy together," another anonymous person told People. "Everyone is thrilled because they're both incredibly nice people."

In case you needed a recap—Shelton recently split from his wife Miranda Lambert after four years, while Stefani split from Gavin Rossdale after 13. But in the words of wise Selena Gomez, "the heart wants what it wants."

Samantha Leal Senior Web Editor I'm Sam, the senior editor at MarieClaire.com.
This content is created and maintained by a third party, and imported onto this page to help users provide their email addresses. You may be able to find more information about this and similar content at piano.io
Advertisement - Continue Reading Below
More From Celebrity
The Palace Just Shared Prince Louis Birthday Pic
Meghan and Harry Talked Every Day During UK Trip
Advertisement - Continue Reading Below
J.Lo Wishes A-Rod's Daughter a Happy Birthday
Irina Shayk Shared a Rare Photo of Her Daughter
John Travolta Talked Dancing With Princess Diana
Meghan Markle and Archie Speak to the Queen
Who Is Alexandria Ocasio-Cortez's Partner?
Did Charles, Harry, and William Mend Relationship?
The Kardashians' Most Body-Confident Nude Shoots
Chrissy Teigen + Meghan Markle Spoke About Loss