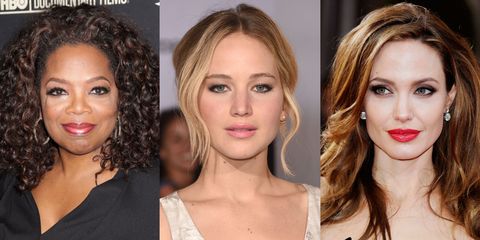 Well, this is refreshing. The Hollywood Reporter's president and chief creative officer, Janice Min, announced via open letter that they will stop ranking women as part of their annual Power 100 list.

Min hopes this change will encourage women in Hollywood to collaborate rather than to compete: "I challenge the groups of women we cover, who create content, who move billions of dollars of business, to work together," she said. "To hunt as a pack. And for those who can, to take a leadership role in addressing the gender issues that we both unconsciously and willfully ignore."

Amen. By the way, this news comes just weeks after Jennifer Lawrence's pay gap essay in Lenny Letter, which was actually mentioned as a point of reference by Min.

Anyone else noticing the domino affect that happens when women in Hollywood stand up for each other?

Mehera Bonner Contributor Mehera Bonner is a news writer who focuses on celebrities and royals—follow her on Instagram.
Advertisement - Continue Reading Below
More From Celebrity
Real Humans Justin & Jessica Are Going to Therapy
Why the Queen Canceled One of Her Annual Events
Advertisement - Continue Reading Below
Channing Tatum Shuts Down Jessie J Hater on Insta
Celebrities Who Are Mistaken for Other Celebs
Dolly Parton, Icon, Started a Viral Meme
Meghan & Harry's Trademark's Been Blocked for Now
Khloe Kardashian's House Has a Room for Extensions
Katie Holmes Stuns in a White Oversize Coat
Taylor Swift Opens Up About Past Eating Disorder
Courteney Cox's 'Friends' Photo Has a Sweet Secret