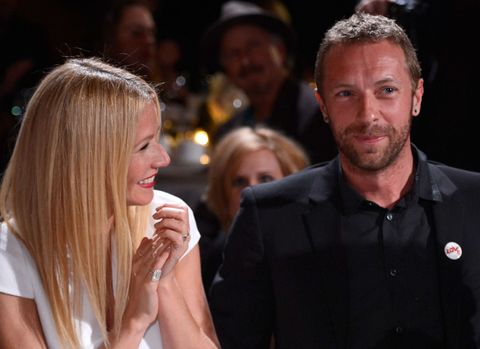 What have you done with your life lately? Because three-year-old Blue Ivy Carter just recorded vocals for Coldplay's new album. The toddler is one of many surprise guests on the bands forthcoming LP, A Head Full of Dreams, which also includes, basically, *all* of Chris Martin's lady friends.

Not only does Martin's ex-wife, Gwyneth Paltrow, make an appearance on the song "Everglow," but his current girlfriend, Annabelle Wallis, is featured in the album's choir. How completely un-awkward and normal!

The appearance of Martin's inamoratas can be chalked up to the spirit of inclusivity: "Everyone who got asked to sing on our album has an important part in our lives," Martin told The Wall Street Journal. "Inclusiveness is the key thing."

Meanwhile, Beyoncé's close friendship with Martin and Paltrow presumably accounts for Blue Ivy's presence on the album. "We recorded Blue Ivy Carter in New York when her mom, Beyoncé, was in the studio," Martin explained. (Thanks for the helpful reminder about who Blue Ivy's mom is.)

Clearly, A Head Full of Dreams will be the best album in the history of girlfriend/ex-wife collaborations...but we're left wondering why Jennifer Lawrence wasn't invited to the party?