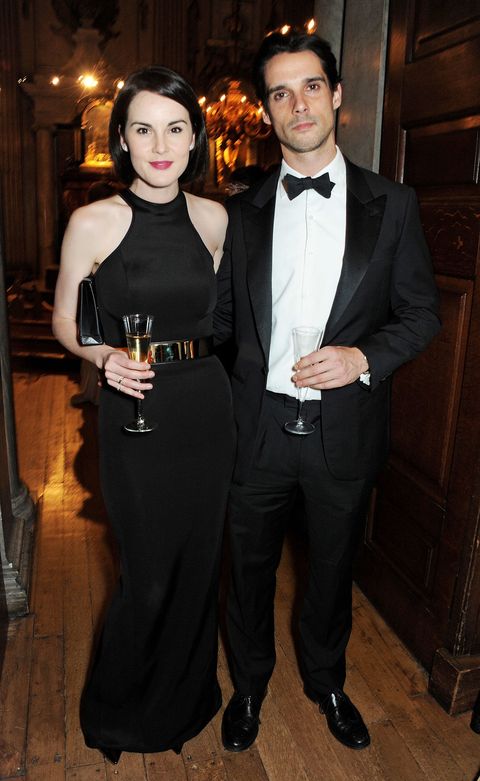 Just days after her fiancé passed away at just 34 years old, Downton Abbey star Michelle Dockery paid tribute to him at an incredibly emotional memorial service in Cork, Ireland, The Irish Times reports.

John Dineen, who met Dockery through her Downton costar Allen Leech, died after fighting a rare form of cancer. Dockery gave a moving euology at a the funeral, which was held a day after her birthday and the day before what would have been his 35th birthday. A childhood teddy bear, a tie, a rugby jersey, and a poetry anthology were on display in his honor.

Dockery reportedly talked about his personality and hilarious wit in a eulogy:

"Whether in his work or his personal life John was extremely loyal. It was clear that when John was in your corner he was there. I was honored to know John. To love him and be loved by him. He was my friend, my king, my hero, my everything. We celebrate him, we honor him and we will miss him. […] John's charm was legendary. He could persuade anyone to do what he wanted in the least pushy way possible. Particularly the women. He had a presence that was electric when he came in to the room. He had a wicked sense of humor. He had a genuine interest in other people."

Dockery had cut a Downton Abbey promotional tour short to be by his side during his final days in hospice care. The two had always kept her relationship private, and she and the Dineen family have requested privacy at this difficult time.

This content is created and maintained by a third party, and imported onto this page to help users provide their email addresses. You may be able to find more information about this and similar content at piano.io
Advertisement - Continue Reading Below
More From Celebrity
Ben Affleck Had Dinner With J.Lo and Her Kids
Jessica Biel Talked "Secret COVID Baby" Phineas
Advertisement - Continue Reading Below
Katie Holmes Paired Baggy Jeans With a White Tank
Why Rachel McAdams Turned Down 'Devil Wears Prada'
Did the Queen's Brooch Send a Message?
Jennifer Lopez and Ben Affleck: Everything We Know
What Happens on Katie's Season?
A Look Back at Gwen Stefani & Blake Shelton's Love
Beyoncé Celebrates Twins Rumi and Sir Turning 4
Katie Nails Casual Cool in Jeans, Tee, and Loafers