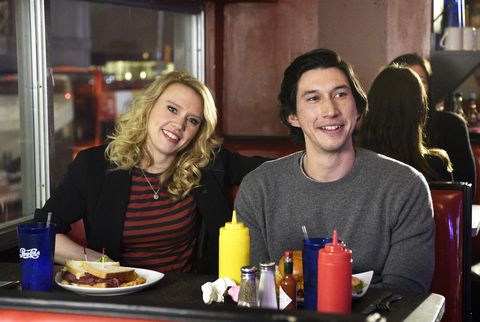 Fact: second only to every single ewok out there (hi, guys!), Kylo Ren is the greatest character in Star Wars history. Mostly because he's basically a petulant teenager with daddy issues.

It's no wonder that Twitter parody Emo Kylo Ren was born, and now Adam Driver is amping up the angst for Saturday Night Live. All that's missing is black nail polish and a Bright Eyes soundtrack.

In a series of promos for his January 16th appearance, Adam eats with Kate McKinnon, and throws an emo fit when she casually mentions that they've never done promos at a diner before. "I know why, because I'm the new guy. And they don't trust the new guys with the promos in the studios, so they brought us here to this godforsaken diner to laugh, and joke and dance like everything's okay, BUT EVERYTHING'S NOT OKAY."

Clearly, this situation calls for some side-swept front bangs and black Converse.