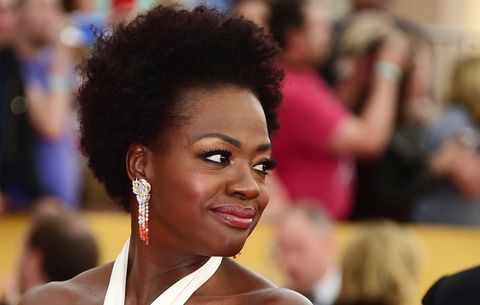 The proper thing to say to a convalescing person would be "Get well soon" or a soothing "There, there," but to Viola Davis, who recently suffered a workplace injury, we say "Gettttt ittt."

In an interview on SiriusXM, the How to Get Away with Murder actress said she's recovering after she threw her back out filming a sex scene with costar Billy Brown, which definitely sets the gold standard for Creative Ways to Hurt Yourself. "I just told them to slow it down for a minute," she said. "I'm going to get back into it. I have to. It's Shondaland! They're going to have me doing all kinds of stuff with all kinds of people."

On a more serious note, though, remember when she thanked Shonda Rhimes for "thinking that a sexualized, messy, mysterious woman could be a 49-year-old, dark-skinned African-American woman who looks like me?" To that and to more kinds of sex scenes featuring more kinds of people, we repeat: Getttt ittt.