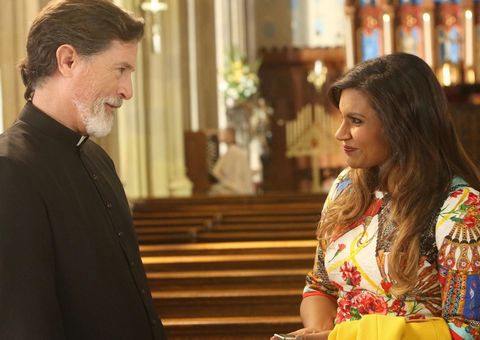 Mindy Kaling made an appearance on The Late Show with Stephen Colbert, and promptly accused the host of being unprofessional during his guest appearance on The Mindy Project. (For those of you who don't watch the show, Colbert played a priest).

"I'm very fond of you, OK? I did not think you were very professional when you came on my show," Kaling said after sipping her water (more like sippin' tea). "We have a scene where you had to give a eulogy over the death of another priest and I thought you didn't handle it that well."

Kaling ended up showing footage of Colbert breaking character on set, but hold up/wait a minute. Colbert also had some footage of his own featuring Kaling going off script and attacking his face.

Watch the cute exchange below and pray that one day you'll be invited to join their two-person friend squad.