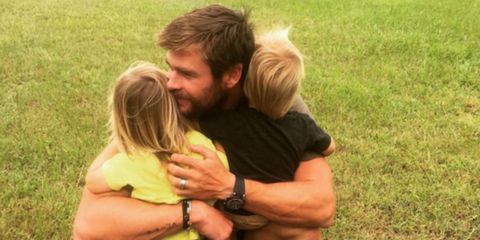 Most dads, if their 4-year-old daughters went "I WANT A PENIS!" would be like "Imma let your mom handle this one." Chris Hemsworth was just like "Cool."

During an interview with Ellen DeGeneres airing Monday, the Ghostbusters actor recounted a recent, Freudian conversation he had with his daughter India about the differences between the male and female anatomies. (Heavy, I know.)

"She was like, 'I really want one...I want a penis!'" he said. "I was like, she's 4, you know what, you can be whatever you want to be. And she goes, 'Thanks dad!' Runs off to the playground and that was it. I'll have to pick that conversation up in a few years time."

Chelsea Peng I'm Chelsea Peng, the assistant editor at MarieClaire.com.
Advertisement - Continue Reading Below
More From Celebrity
Khloé Kardashian Is Being Trolled Over Febreze
Katie Holmes Is in Head-to-Toe Chloé at Their Show
Advertisement - Continue Reading Below
A 'Friends' Reunion Special Is Coming to HBO Max
Ariel Winter Now Has Strawberry Blonde Hair
46 Stars Who Dated Before They Were Famous
Every Easter Egg in Taylor Swift's 'The Man' Video
Kate Middleton Does Some Sports in $38 Sneakers
Sarah Hyland Defends Ariel Winter’s Dress on Insta
Prince Harry Wants to Go by Just "Harry" Now
Ashley Graham Talked Breast Pumping in an Uber