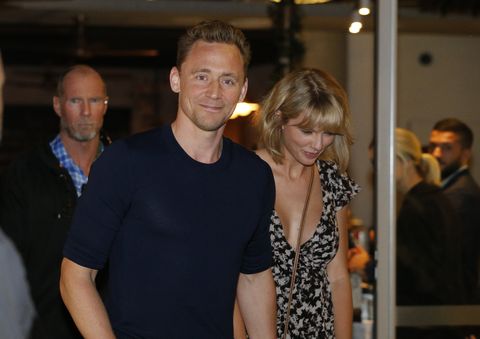 Time to prepare our collective bodies, because Hiddleswift is poised to make their first official appearance as a couple in a mere matter of weeks.

Tom Hiddleston just nabbed an Emmy nomination for his outstanding performance in The Night Manager (seriously, watch it), and—unless they break up in the next month—he'll likely attend the event with Taylor Swift. After all, this is the man who wore an "I Heart T.S." tank top in public. He's clearly all about shouting his love from the proverbial rooftops.

So, will they walk the carpet hand in hand? Will they do that thing where Taylor stands in the background, but we can totally still see her on camera? Or will they skip the Emmys altogether because they're too busy watching soap operas with fellow throwback people in Australia? Only time will tell, friends.

What's certain is that the 68th annual Primetime Emmy Awards air Sunday, September 18th, and lord knows how many more Hillary Clinton GIFs Katy Perry will have tweeted by then.