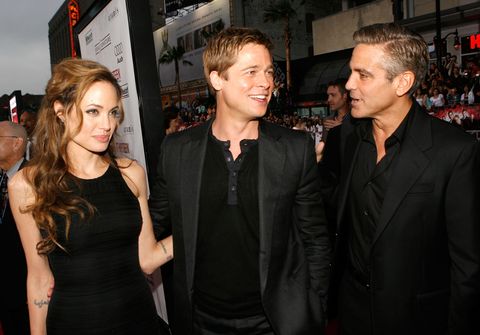 A bit like that joke someone made about who would get custody of Matt Damon in the event of Ben Affleck and Jennifer Garner's split ::moment of silence::, one wonders the same about George Clooney, who was indeed visibly saddened when he learned the news about close friends Brad Pitt and Angelina Jolie in the most uncomfortable way possible: via CNN reporter—on camera.

At Tuesday's Leaders Summit for Refugees at the United Nations General Assembly in New York, Amal's arm candy was asked to comment on the dissolution of his longtime friend and collaborator's marriage. "What happened?" Clooney said, his face registering 283 emotions in a few seconds. Then the media training kicked in. "I didn't know that. I feel very sorry then. That's a sad story and unfortunate for a family. It's an unfortunate story about a family. I feel very sorry to hear that." A beat, then: "This is the first I've heard of it."