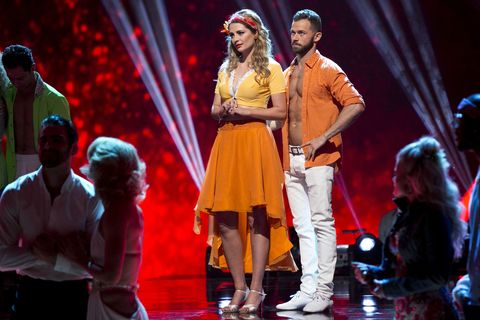 In a surprisingly apt analogy, Mischa Barton has likened appearing on Dancing with the Stars to being conscripted to fight for one's life in a sadistic gladiatorial competition—but with children!—to atone for some long-ago rebellion AKA The Hunger Games. Sounds about right.

Really capturing the pageantry and public-participation aspects of it, the OC actress said she "was so glad to get kicked off."

"Ugh, I had no idea it would be so bad. I got told off by my dancer," she said in an interview with the Ringer. "I was supposed to control the costumes, I was told that I could do the design aspect of it, that's kind of the reason why I agreed to do it."

But as you might know, Barton's personality didn't translate well on the "popularity contest" that is network television, and after three painful episodes, she and partner Artem Chigvintsev were eliminated. Still better than being stung to death by killer bees or blown up, though.

Chelsea Peng I'm Chelsea Peng, the assistant editor at MarieClaire.com.
This content is created and maintained by a third party, and imported onto this page to help users provide their email addresses. You may be able to find more information about this and similar content at piano.io
Advertisement - Continue Reading Below
More From Celebrity
Hailey Wore a Nude Blazer and Micro Dress
Gabrielle's TikTok About Her Prom Date is So Funny
Advertisement - Continue Reading Below
Victoria Beckham Shuts Down 'Spice World 2' Rumors
Kendall Jenner Shared Her Experience of Anxiety
'The Voice' Star Blake Shelton Opens Up About Gwen
Sussexes Share New Birthday Photo of Archie
Charles Is Still Upset Over Harry's Oprah Tell-All
Meghan and Harry Share New Archie Photo
The Cambridges Share Their First Full YouTube Vid
Courteney Cox Said the 'Friends' Fountain Was Grim