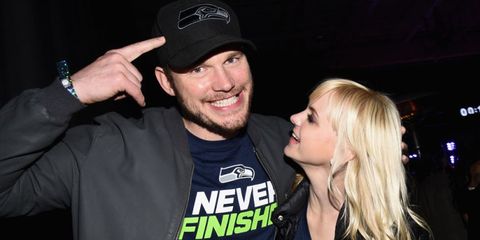 Chris Pratt and Anna Faris have crazy chemistry IRL. Just look at them on any red carpet ever if you need proof:

They've worked together before, like in 2011's What's Your Number, but now they're bringing their epic chemistry to the small screen on Faris' CBS show, Mom. ET Online reports that Pratt will appear on the January 19 episode as Faris' love interest, Nick.

While it's unlikely that Pratt will become a series regular (since, you know, he's busy making all the movies), he and his real-life wife are going to spend most of his episode making out, if the stills from CBS are any indication.

Making out with your hot spouse for work? That doesn't sound like the worst job in the world.