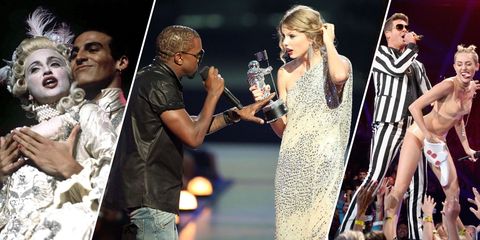 Every summer we mark our calendars for the MTV Video Music Awards because we know that it will, without a doubt, be the craziest day of the year. As in epic live performances, can't-look-away-awkwardness, inspiring speeches, major riffs, and "Wait, did he/she really just do that?" double-takes. For a nostalgia-filled stroll down memory lane, look back on these 20 unforgettable moments.

When Miley showed up in this and every one of her costume changes thereafter.

Advertisement - Continue Reading Below
2 of 24
Nicki Minaj and Miley Cyrus, 2015

"Miley, what's good?" Nicki Minaj used her acceptance speech of the Best Hip-Hop Music Video award last year to call Miley out for comments she made in an interview. Needless to say, the crowd and the internet were left wondering, "Is this real life?!"

Six years after the pair's infamous VMA moment, the artists had a very brief period of peace as Taylor Swift presented Kanye with the Vanguard award. Before bringing him to the stage, Swift made a point to call Mr. West "my friend" (with serious emphasis on the friend bit).

Things continued to get weird after Kanye got to the mic. Though The Life of Pablo rapper is known for rants and outbursts, he outdid himself by announcing his run for presidency in 2020. *upside down smiley face*

The Biebs initially turned heads on the red carpet with an, um, *interesting* new hairstyle. He proceeded to show his emotional side after his performance of "What Do You Mean" when the singer burst into tears! Skip to the end of the video to see the waterworks.

At last year's festivities, Perry and Riff Raff arrived in a double denim look that was totally reminiscent of the matching Canadian tuxedos donned by Britney Spears and Justin Timberlake in 2002.

All eyes were on Miley when she joined in on the "Blurred Lines," fun alongside Robin Thicke clad in nude latex lingerie for some decidedly not-safe-for-the-kids twerking.

The most extreme of fashion statements, Gaga arrived at the VMAs and accepted the Video of the Year Award for "Bad Romance" wearing a head-to-toe outfit made of raw meat. Yep.

Advertisement - Continue Reading Below
9 of 24
Kanye West and Taylor Swift, 2009

Awkward doesn't even begin to describe our feelings as we watched Swift attempt to accept her award for Best Female Video while being interrupted by Kanye West who proclaimed her fellow nominee Queen Bey made "one of the best videos of all time." While he did have a point, we deem West's behavior thoroughly uncool (but 100% entertaining).

We're not sure what compelled Lil Mama to jump on stage during the finale of Jay Z and Alicia Key's performance of "Empire State of Mind," and, uh, yeah we'll leave it at that.

There may have been three performers on stage, but all eyes were on Britney and Madonna when they shared a steamy kiss during their performance of "Hollywood." Sorry, X-tina!

Aguilera wasn't exactly the girl next store, but we were all saying "whoa" when she debuted her entirely new "Dirrty" look on the VMA red carpet.

In all fairness, this was poor planning on MTV's part, but Jackson accidentally accepted a fake award for "Artist of the Millennium" after Britney Spears deemed him as such while wishing him a happy birthday. *Tugs at collar*

During her performance of "I'm a Slave 4 U," Spears brought out an albino Burmese python, wearing it ever-so-seductively on her shoulders. Now that's dedication to your art.

Knowing the power of a bold red carpet ensemble, Gray used her VMA outfit as an opportunity to plug her new album. The lacey pink and purple dress was emblazoned with "MY NEW ALBUM DROPS SEPT. 18 2001," and "BUY IT."

It's our firm belief that Diana Ross can do NO wrong—and we thoroughly enjoyed watching her give Lil' Kim's sequin pastie-adorned boob a friendly jiggle.

In which McGowan invents what we now call the "Naked Dress."

The soulful songstresses presented at the award show together, which is a lot of diva-licious energy for one stage. Not to mention, they seemingly wore the same brownish, plunging slip gown.

Apple's IDGAF demeanor always leaves us awe-struck in the best way, and we can't thank her enough for using her acceptance speech for Breakout Video of the Year to remind us that individuality is king: "This world is bullshit, and you shouldn't model your life about what you think that we think is cool, and what we're wearing and what we're saying and everything," she said. "Go with yourself."

Love gave us so much life when she boldly decided to disrupt Madonna's interview LIVE on TV. Girlfriend has got balls and we love it.

After a slightly bizarre speech in which Jackson proclaimed, "Just think, nobody thought this would last," in reference to his relationship with Presley (which, ahem, didn't), the couple shared an even more bizarre makeout sesh.

Madonna's iconic performance of "Vogue," was in a word: Epic. From the Victorian costumes to the theater-like choreography (complete with tongue-in-cheek sexual innuendo) we could watch it over and over again.

During the show's inaugural year, Madge made jaws drop during her stirring, sultry rendition of "Like a Virgin," wearing a wedding dress, on top of a 17-foot cake. 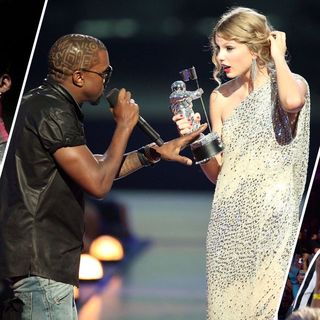 Advertisement - Continue Reading Below
This content is created and maintained by a third party, and imported onto this page to help users provide their email addresses. You may be able to find more information about this and similar content at piano.io
More From Celebrity
This Is Dax and Kristen's Approach to the Sex Talk
Angelina Jolie Dodged a Question About The Weeknd
Advertisement - Continue Reading Below
Kourtney and Travis Want a "Destination Wedding"
Harry Panicked About the Queen's Hospital Stay
Olivia Munn Doesn't Care About "Settling Down"
These 83 Twitter Accounts Harass Meghan Markle
Adele's Ex Came to a Special Taping of Her Album
Kristen Stewart on a "Spooky" Moment Playing Diana
Travis Covered His Ex' Name With Tattoo for Kourt
Kendall Jenner Wore a Bedazzled Pink Cowboy Hat