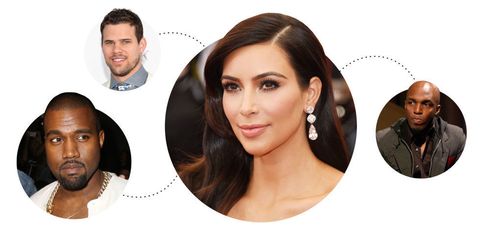 It's always a bummer when a relationship doesn't work out, but these A-listers prove that there's no reason not to keep trucking on in the name of love. Here, their marital histories.

The explosive (and highly scrutinized) end to Cruise's marriage with Katie Holmes is still quite fresh in our minds, but who can forget that he and Nicole Kidman were among Hollywood's elite couples of the '90s? Before that, the actor was briefly married to actress (and fellow Scientologist) Mimi Rogers.

Madge tied the knot with Sean Penn back when both of them were still relatively new to superstardom. Then, more than a decade after they broke it off, the singer married English filmmaker Guy Ritchie.

Though the actress and husband Will Kopelman seem quite happy together (and are parents to two kids), third time's the charm: Barrymore was previously married to comedian Tom Green in the early aughts, and had a brief union with Jeremy Thomas before that.

Brit is doing it for herself more than ever these days, but her Vegas marriage to childhood friend Jason Alexander—which lasted all of 55 hours—still goes down in history as one of her most memorable moments ever. She then married Kevin Federline (remember their coordinating "pimps" and "maids" Juicy tracksuits?), and though it didn't last, she did give birth to two beautiful boys while they were married.

The actress is now married to French actor Olivier Martinez, but tied the knot twice before that: first to former baseball player David Justice, followed by R&B/soul singer Eric Benét.

Long before she was a household name, Kim eloped with music producer Damon Thomas at just 19 years old—even keeping their union a secret from her family for three months. Seven years and stratospheric fame later, she tied the knot with basketball player Kris Humphries in front of the Keeping Up With The Kardashians cameras—only to file for divorce 72 days later. But though this dissolution made her the butt of more than a few jokes, we'd say Kim got the last laugh: She's now happily married to Kanye West and mother to North, and pretty much on top of the world.

After the supermodel ended her union with French artist Jean-Francois Allaux, she was famously Billy Joel's "Uptown Girl" for nearly ten years (giving birth to daughter Alexa Ray during that time). While she was separated from Joel in 1994, she met property developer Rick Taubman while on vacation in Colorado, and the two fell in love after surviving a near-fatal helicopter crash. Their marriage lasted just seven months. Brinkley's last marriage was with architect Peter Cook, who became the father of her two other children, Jack and Sailor.

1997 was a big year for then-23-year-old Heidi Klum: She received her first set of Victoria's Secret Angel wings and married stylist Ric Pipino. The pair divorced in 2002 (FWIW, her stint as an Angel lasted until 2010). She went on to marry Seal in 2005, and though the two famously renewed their vows annually, they called it quits in 2014.

Just as Davis' career was getting started, she married and then divorced restaurant manager Richard Emmolo, followed by a three-year union with Jeff Goldblum after meeting the actor on the set of Transylvania 6-5000. In 1993, she tied the knot with Renny Harlan—who directed her in Cutthroat Island and The Long Kiss Goodnight—before the two went their separate ways in 1998. She has now been married to plastic surgeon Reza Jarrahy for nearly 14 years, and they have three children together.

Anderson falls under the specific category of those who have fewer ex-husbands than they do divorces—though she and Rick Salomon called it quits quickly after marrying in 2007, they gave it another try in 2014 and are currently divorcing again. Before that, she had unions with Kid Rock and Tommy Lee.

The iconic TV personality has enjoyed singledom for quite some time, but is also one of those few who attempted remarrying one of her exes: She and producer Merv Adelson tied the knot twice, first in 1981 and then again in 1986 after a two year hiatus. Well before that, she was first married to business executive Robert Henry Katz, before giving it a go with theater magnate Lee Guber for 13 years.

The sultry French icon was of course, quite a catch, and she ultimately married four of her suitors. First was French screenwriter Roger Vadim, who then went on to marry Jane Fonda after he and Bardot divorced. Next up was actor Jacques Charrier (who fathered her now-estranged son, Nicolas-Jacques), followed by German photographer Gunter Sachs four years after her union with Charrier dissolved. She has now been happily married to politician Bernard D'Ormale for more than two decades.

Fonda's first nuptials were with Roger Vadim, who had divorced Brigitte Bardot eight years prior. Famously antiwar, Fonda then went on to marry activist Tom Hayden just three days after her divorce from Vadim was finalized—not long after the pair famously came under public fire for filming a propaganda documentary in Vietnam. After her union with Hayden ended after nearly 20 years, Fonda married mogul Ted Turner; that marriage ended ten years later, in 2001. These days, she's cozying up to music producer Richard Perry, her partner of five years.

Arquette's marriage to Nicolas Cage was the first for both but the last for neither: The Oscar-winning actress went on to marry (and divorce) actor Thomas Jane, while Cage tied the knot with Lisa Marie Presley and then again with Alice Kim, his current wife.

The actress actually has her first marriage to thank for her household name: Years before she skyrocketed to recognition with St. Elmo's Fire, Demi Guynes married musician Freddy Moore—and while that ended after five years, she kept his name as her professional title. She went on to marry Bruce Willis just a couple of years later, and gave birth to Rumer, Scout, and Tallulah during their 13-year union. Her relationship with Ashton Kutcher was one of the most talked about of the mid-aughts, though it ultimately ended in divorce when Kutcher allegedly cheated.

Winslet and current husband Ned Rocknroll have been going strong for more than two years, but the actress had two marriages under her belt prior: first with film director Jim Threapleton (during which Winslet gave birth to a daughter, Mia), followed by director Sam Mendes, the father of her son, Joe. After marrying Rocknroll (who happens to be Richard Branson's nephew), the couple welcomed a boy, Bear, in 2013.

J.Lo's relationship history has been talked about nearly as much as her illustrious career (Bennifer, anyone?), but she actually made it official three times. Before marrying Marc Anthony in 2004 (and then giving birth to the couple's adorable twins), she was briefly married to backup dancer Cris Judd before cutting ties in 2002. Before that she was married to Cuban waiter Ojani Noa.

It's hard to think of a time pre-Brangelina, but it's also preeeetty hard to forget the actress' PDA-filled marriage to Billy Bob Thornton—vials of blood and all. Prior to that, the actress tied the knot at 20 years old to actor Jonny Lee Miller.

The iconic singer has been married to doctor and philanthropist Mitch Besser for nearly three years, but that marks her third trip to the altar: Her first was with Hare Krishna monk Radha Raman, which was a brief affair, followed by a much longer union with Israeli film producer and human rights activist Uri Fruchtmann.

Ford has been with Calista Flockhart since a meet-cute at the 2002 Golden Globe Awards, and the couple made it official in 2010. But though it's his third marriage, it's pretty clear that he's a commitment kind of guy: He and screenwriter Melissa Mathison were together for 17 years, and prior to that, he was married to Mary Marquardt for 15 years. He had two children with each.

We were admittedly floored when Griffith and Antonio Banderas called it quits on their 18-year marriage last year, but it was actually the actress' fourth divorce (albeit with three men). She married Don Johnson (father to Dakota) for the first time in 1976 (for just seven months) and then married him again in 1989—and was married to actor Steven Bauer for five years in between.

She was famously married to Sean Penn for 14 years (and the couple had two children together), but prior to her swift rise to fame in the wake of The Princess Bride and then Forrest Gump, Wright tied the knot with soap actor Dane Witherspoon. Wright is currently engaged to Ben Foster and is head over heels, she says.

While working on her second album, Music Box, Carey married Tommy Mottola, the president of Columbia records (her label). Never one to scrimp on glamour, the singer's nuptials were an over-the-top affair meant to resemble Princess Diana's royal wedding to Prince Charles. They broke it off about five years later, and a decade after that, Carey married Nick Cannon after meeting him just a month earlier. Their marriage saw the birth of their twins, Monroe and Morrocan—as well as lavish annual vow renewals—but ultimately ended in 2014.

After a couple of on-again, off-again European flings, Lane and French actor Christopher Lambert married in 1988, and had one daughter together before separating and ultimately divorcing in 1994. The actress then tied the knot with Josh Brolin, but decided to amicably call it quits in 2013.

Next
A Chronology of the Summer That Love Died 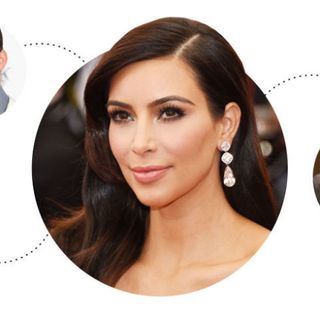 Victoria Dawson Hoff Associate Editor Victoria Hoff is the associate editor at ELLE.com, covering everything from fashion to beauty to wellness.
This content is created and maintained by a third party, and imported onto this page to help users provide their email addresses. You may be able to find more information about this and similar content at piano.io
More From Celebrity
Jennifer Lopez and Ben Affleck: Everything We Know
Harry & Oprah's Mental Health Doc Has a Title
Advertisement - Continue Reading Below
Serena Williams Might Miss the Tokyo Olympics
Jennifer and Ben Have "Unreal" Chemistry Together
The Sussexes Marked Archie's Bday in a Lovely Way
Queen's Cousin Accused of Selling Access to Putin
Meghan Wore a Meaningful Necklace for Vax Live
How Celebrities Are Celebrating Mother's Day 2021
Gabrielle and Kaavia's Mother's Day Pic is So Cute
Ben Affleck's Moving Tribute to Jennifer Garner