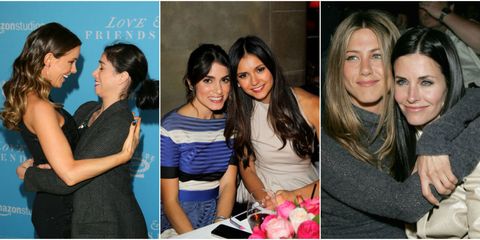 For every Bella Hadid/Selena Gomez situation, there's another pair of famous friends who dated the same person and brushed all of the expected drama off their shoulders.

1 of 11
Cameron Diaz and Kate Hudson

The actresses were both linked to former New York Yankee Alex Rodriguez around the same time back in 2010, to the point where it's unclear who actually dated him first. It was also rumored that Hudson hooked up with Diaz's then-recent ex Justin Timberlake as "payback" for Diaz dating Rodriguez.

They'd buried the hatchet by 2012, when they were photographed at Vanity Fair's Oscar party looking very friendly. As recently as September 2016, they even partied together at Nicole Richie's birthday.

2 of 11
Jennifer Aniston and Courteney Cox

In a double-dose of "Can you believe those two dated?", the former Friends co-stars have shared one hook-up: Each of the actresses (separately) dated Counting Crows frontman Adam Duritz back in the 1990s. Aniston dated Duritz first.

3 of 11
Gigi Hadid and Taylor Swift

Hadid, a card-carrying member of T-Swift's #squad, dated singer Joe Jonas in 2015 – seven years after the pop star dated Jonas herself and was dumped by him in an infamous 27-second phone call. Swift didn't seem to hold a grudge though, and was even seen hanging out with the pair before they called it off.

4 of 11
Selena Gomez and Taylor Swift

Apparently, the circle of eligible 20- and 30-something celebrity men is smaller than you'd think, because Swift has dated the same guy as a friend more than once. Gomez and Swift have been friends for years, and both have allegedly dated Taylor Lautner.

The 1989 singer dated the Scream Queens actor in 2009, and her single "Back to December" is rumored to about the relationship; Gomez dated him earlier that same year. Gomez and Swift are, by all accounts, still very close, and Lautner is currently linked to his costar Billie Lourd.

5 of 11
Taylor Swift and Cara Delevingne

Yet again, Swift and a friend dated the same man. The "I Knew You Were Trouble" songstress dated One Direction's Harry Styles briefly in 2012 and 2013. The English model was rumored to be linked to Styles as well later in 2013. Regardless, Swift and Delevingne seem completely unbothered by having dated the same guy–in the years since, they've hung out constantly and showered each other with love on social media.

6 of 11
Dianna Agron and Emma Roberts

The Glee star dated Alex Pettyfer seriously for less than a year (at one point even sparking engagement rumors) after meeting on the set of I Am Number Four, before breaking up in early 2011. Prior to that, Pettyfer had dated Roberts back in 2008, even getting a tattoo of her initials on his finger.

Since then, Agron and Roberts have been spotted hanging out at multiple events, like the 2011 Met Gala and after-party.

7 of 11
Kristen Wiig and Drew Barrymore

Wiig and Barrymore have been close for years, but there was definitely some initial weirdness when the Bridesmaids star began dating her friend's ex back in 2011. The Santa Clarita Diet actress dated The Strokes' drummer Fabrizio Moretti seriously for five years, splitting in 2006, before Wiig began dating him.

Barrymore was admirably chill about the relationship. "It all seems so wacky and incestuous," Barrymore joked in an Allure interview at the time. "But that's kind of how life works! It seems fitting they would find each other. I was like, 'Right, of course, that makes perfect sense.'" Wiig and Moretti split in 2013.

8 of 11
Drew Barrymore and Gwyneth Paltrow

The actresses have been close friends for a long time, even sharing a much-talked-about make-up free selfie in late 2016 during a girlfriends' mountain-climbing trip. Apparently, the fact that they've both dated Luke Wilson–Paltrow in 2001, after the filmed The Royal Tenenbaums together, and Barrymore for several years in the late '90s–didn't bother them at all.

9 of 11
Kate Beckinsale and Sarah Silverman

This seems to be an atypical instance of two women becoming friends because of having dated the same man. Beckinsale was in a relationship with her Underworld co-star Michael Sheen for 8 years and shares a daughter, Lily Mo Sheen, with him. The actors remain close friends and co-parents, and Beckinsale is not shy about sharing how much she adores her ex's current girlfriend, comedian Sarah Silverman.

"Sarah's such a fantastic woman," Beckinsale told Stylist in 2016. "I'm completely open to any other strong, cool, sensitive, independent-thinking women who are going to be an influence in my daughter's life...Sarah's a great person and I'm glad she's in the village that's helping. It's important as a teenager to have good women in your life building up the fabric of your experience of becoming a woman. Even if Sarah wasn't Michael's girlfriend, I'd want her to be in that."

Dobrev dated her on-screen love interest Ian Somerhalder for several years before breaking up in 2013. Somerhalder moved on with their mutual friend Nikki Reed, marrying her in 2015. For years, rumors persisted about Reed backstabbing Dobrev and forcing her off The Vampire Diaries, but all three members of this so-called "love triangle" finally and firmly shut that nonsense down in February 2017 with Instagram posts of a group hang-out.

"For the last few years, we thought addressing any baseless rumors with silence was the best way," Reed captioned her photo of the three looking chummy. "So here's to putting an end to all those fake stories of on set jealousy, betrayal, made-up-friendships lost, and women hating women. Because at the end of the day, that's what this is about: teaching girls that you have to hate other girls only breeds a generation of women who believe you have to hate other women."

11 of 11
Debbie Reynolds and Elizabeth Taylor

In this infamous Hollywood tale of two friends dating the same guy, Reynolds and her then-husband Eddie Fisher were longtime couple friends with Elizabeth Taylor and her husband Mike Todd. When Todd died in a plane crash and Taylor was widowed, Taylor and Fisher grew closer and closer, eventually culminating in Fisher divorcing Reynolds (with whom he shared two kids, Todd and Carrie Fisher) to marry the Cleopatra star.

It caused a huge scandal at the time (though the Taylor-Fisher marriage didn't last either), but Reynolds eventually forgave Taylor–they reconciled and even costarred in a TV movie called These Old Broads.

Next
All of Kate Middleton's Looks from Her Paris Tour 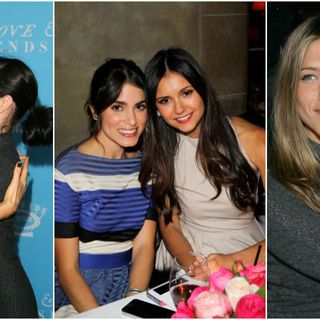 This content is created and maintained by a third party, and imported onto this page to help users provide their email addresses. You may be able to find more information about this and similar content at piano.io
More From Celebrity
Did the Queen's Brooch Send a Message?
Jennifer Lopez and Ben Affleck: Everything We Know
Advertisement - Continue Reading Below
What Happens on Katie's Season?
A Look Back at Gwen Stefani & Blake Shelton's Love
Beyoncé Celebrates Twins Rumi and Sir Turning 4
Katie Nails Casual Cool in Jeans, Tee, and Loafers
Gigi Hadid Wore the Coolest Bright Orange Eye Look
Courteney Cox's Daughter Coco Is Her Double
Sophie Shared a Stealth Selfie on Instagram Story
Meghan and Diana Had Similar Issues with the Queen