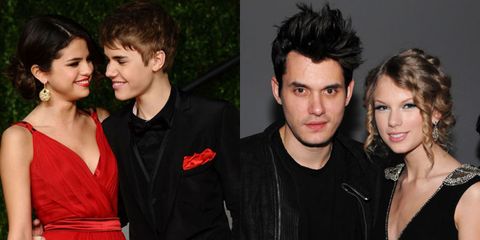 The DJ famously dated Selena Gomez back in 2015 and he recently opened up to Billboard about what it was like to date the pop star.

"Reporters were calling my parents," he said. "People were hacking my friends' phones. I was pissed. [Though] I kind of knew what I was getting myself into...She is one of the most talked-about people in the world, but I had no idea how much that would change my life."

After Taylor Swift penned her breakup anthem, "Dear John," allegedly about their courtship, John Mayer spoke out about his ex.

"I never got an e-mail. I never got a phone call," he told Rolling Stone. "I was really caught off-guard, and it really humiliated me at a time when I'd already been dressed down. I mean, how would you feel if, at the lowest you've ever been, someone kicked you even lower?"

John Mayer has a long list of famous exes and no qualms about talking about any of them. In an interview with Playboy, he addressed the generation gap between him and Jennifer Aniston.

"One of the most significant differences between us was that I was tweeting. There was a rumor that I had been dumped because I was tweeting too much. That wasn't it, but that was a big difference. The brunt of her success came before TMZ and Twitter. I think she's still hoping it goes back to 1998," he said.

They've been through a lot of ups and downs, but looking back on his relationship with Selena Gomez in a 2015 Billboard interview, Justin Bieber had only the nicest things to say about his ex.

"I'm proud of the woman she is today. When you love someone that much, even if something comes between you, it's a love that never really dies."

In a 2012 Elleinterview, Selena Gomez talked about the time Justin Bieber rented out the Staples Center so they could have a private movie date.

"If I'll share anything with you, it's that he really is a hopeless romantic. I had just mentioned it in the car — all I said is that I really want to see Titanic again, and then…"

After their split in 2005, Jennifer Aniston famously opened up to Vanity Fair about Brad Pitt's lack of a "sensitivity chip."

"Brad is not mean-spirited; he would never intentionally try to rub something in my face. In hindsight, I can see him going, 'Oh—I can see that that was inconsiderate.' But I know Brad. Brad would say, 'That's art!'...There's a sensitivity chip that's missing."

During a performance in London, the comedian made a cringe-worthy joke about his sex life with ex-wife Katy Perry.

"When I got divorced, I considered becoming a monk," he reportedly said. "When you're a monk, you're not allowed to have sex with anyone. When you're married, it's one person. That's one more than a monk. It's not that different. I'd be having sex thinking, 'Think of anyone, anyone else.'"

Khloe Kardashian and Lamar Odom have split, but Khloe has nothing but respect for her ex.

"Lamar is genuinely one of the best people I've ever met, and everyone says that when they meet him. I think Lamar's gonna always be that person [for me] but that's what made it so special," she told Complex in 2015. "Even if I had it for five years or whatever, it was the best ever and I'm grateful I did. Some people don't get that ever and I had that magic for a long time."

Cameron Diaz and Justin Timberlake have both moved on and Diaz has some interesting notes about Justin's acting career.

"He's frickin' weird in movies," she told Us Weekly. He's so bizarre and hilarious. I say that with great respect to his character and what he's done!"

Nick Cannon has nothing but nice things to say about Mariah Carey, who he still sees regularly as they continue to coparent their kids.

"At the end of the day, she's an amazing mother and we focus on our kids," he told AOL. "That's never going to change no matter who's in my life or who's in her life. We have kids together, so we'll always be family."

In an interview with GQ, Justin talked about his split with fellow pop star Britney Spears.

"I felt like she had a couple of opportunities to just sort of stick up for me, and she didn't. Which is ﬁne. But at that time, you know, I fought back, and that's the way I fought back. I used my mind. I came up with a song."

While Ben Affleck hasn't always said the nicest things about the state of his career when he dated Jennifer Lopez, he revealed in a Hollywood Reporter interview that they keep in touch and celebrate each other's successes.

"We don't have the kind of relationship where she relies on me for advice, but we do have the kind of relationship where there'll be an e-mail saying, 'Oh, your movie looks great.' I remember when she got American Idol. I said, 'This was really smart. Good luck,'" he said. "I touch base," he said. "I respect her. I like her. She's put up with some stuff that was unfair in her life, and I'm really pleased to see her successful." 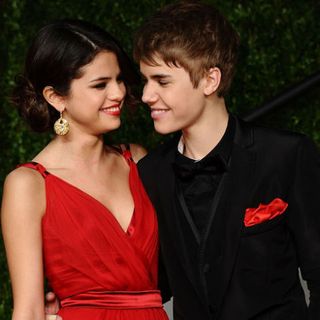