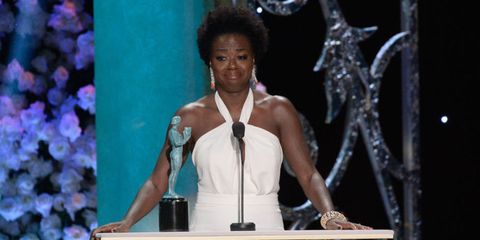 Hollywood seems to have a never-ending woman problem. While we're starting to see more powerful and fully-fleshed out female characters on TV and in films (The Honorable Woman, How To Get Away with Murder, Orange Is the New Black, Transparent, Olive Kitteridge, to name a few), the entertainment industry is still dominated by men. This year's Oscar nominations are male-heavy, with no female directors or screenwriters up for awards, and most of the Best Picture nominees feature male protagonists. It feels like we're on the cusp of an important shift, but a push is needed, especially when it comes to the work behind the scenes.

At this weekend's SAG Awards, 49-year-old Viola Davis won for her work as Annalise Keating on How to Get Away With Murder, noting in her acceptance speech how thankful she was to play a "sexualized, messy, mysterious woman...who looks like me." With that in mind, we asked seven actresses to share what they think needs to be done in 2015 to ensure that Hollywood continues to bring more complicated and realistic female roles to the screen.

"The sexualized, messy, outwardly strong, inwardly vulnerable women that I know in my life, they're anywhere from a size zero to a size 24," Davis said backstage after her win. "They're the women who are usually marginalized on TV. They don't exist there. But they do exist in life. And to me, that's where you can find the expansiveness of stories. I think we want to see ourselves. We want to be inspired by that. We don't want to keep seeing these fictionalized images of women and just kind of feel bad about ourselves, really, at the end of the day. I sometimes want the fantasy, but more often than not, I want to see the reality. I want to feel less alone when I look at TV and film and theater."

"I love what Jill Soloway is doing at Transparent," Laverne Cox said on the red carpet. "She's advocating for having a more diverse writing room. They're writing a show about trans folks and she felt there should be a trans person in the writer's room. She took steps to do that and now my dear friend is in the writer's room at Transparent. I think that having diverse people in positions of power–writing, producing–is a key element of that. I think the writers on my show, Orange Is the New Black, do an amazing job telling human stories and writing things that are unexpected and interesting and deep and challenging."

"It's frustrating in movies that there are often three or four male parts and one female part," said Gretchen Mol, who was nominated for Boardwalk Empire, a notably male-dominated show. "I've found that doing plays and other things can let you open yourself up and fulfill your acting bug. You can't just rely on Hollywood. I think everybody professes to be trying to hire more female directors and hopefully the verbalizing of that is going to make it happen. We have to make people aware that it's an issue."

"I think we're doing a pretty good job right now," Modern Family actress Sarah Hyland noted. "But it's the beginning and we're just starting to take those steps. Women as a whole are working it–it's more of an issue from the outside and everybody else. I'm especially tired of the cliché in roles that women are crazy. Sometimes we are, but sometimes we're crazy because men drive us crazy. It can be damaging onscreen. We need to stop making fun of it and stop laughing at it, instead of accepting how we are and embracing it."

"I just think it's so important to get more women in the industry, in every capacity, writers, grips – at every level," Birdman actress Andrea Riseborough said. "It's an educational thing. We need to encourage women to step behind the camera and give them opportunities to learn."

"If you write a script you should be required to look at the Bechdel Test and make sure your characters have a name and talk about things other than a man," said Orange Is the New Black cast member Lauren Lapkus, who will also appear in the upcoming action film Jurassic World. "Those are important things. I do a lot of comedy and it's been an age old question, 'Are women funny?' And of course women are funny. There are plenty of unfunny men so why aren't we talking about that? It shouldn't even be a conversation."

"I thank God that Netflix had the bravery to take a show like Jenji [Kohan]'s, who is writing characters for a multitude of women who I have never seen on television," Uzo Aduba said. "I didn't realize until being part of Orange Is the New Black that I had just never seen anything like that. It's thrilling to me that here are outlets that are interested in pursing that. I think it's a conversation that needs to continue a dialogue on how to reach that and really be fearless in our attack to put real women onscreen."