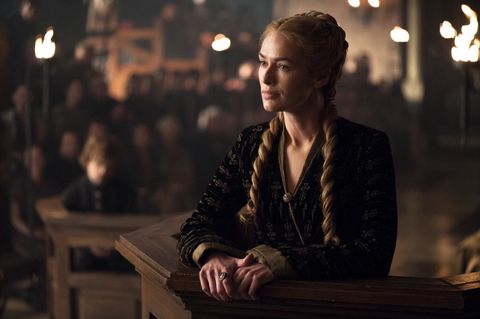 Potential spoilers ahead—you've been warned. An early outline of George R.R. Martin's Song of Ice and Fire series just leaked online, and it looks like the plot was going to be way different at the beginning—and include even more incest.

British bookseller Waterstones tweeted photos of the outline, which was sent to HarperCollins along with the first 170 pages of A Game of Thrones. Waterstones has since since deleted their post, but since this is the Internet, the photos have spread like wildfire.

"This is going to be (I hope) quite an epic," he wrote in the 1993 letter. "Epic in its scale, epic in its action, and epic in its length." That turned out to be an understatement, since he originally pitched the series as a trilogy.

There were lots of plot details he included that didn't make it into the books:

• Sansa Stark would marry Joffrey Baratheon and bear him a son. She would end up choosing him and her son over the Starks, a decision she would deeply regret later.

• Robb Stark was originally intended to die on the battlefield, maiming Joffrey in the process.

• Daenerys Targaryen was set to kill Khal Drogo to avenge her brother, not the other way around, and then use her dragon eggs to manipulate the Dothraki.

• Arya Stark and Jon Snow would fall in love, but not act on it because, well, it's incest, and Jon has already taken a vow of celibacy. Tyrion also falls for Arya, creating an awkward love triangle.

One of the final paragraphs of the letter is completely blacked out, so we don't really know for sure how he planned on ending it all.

"I want the reader to feel that no one is ever completely safe, not even the characters who seem to be the heroes," he wrote. "The suspense always ratchets up a notch when you know that any character can die at any time."

That all being said, Martin said he planned on sparing five key characters: Tyrion Lannister, Daenerys Targaryen, and "three of the children of Winterfell, Arya, Bran, and the bastard Jon Snow." Who knows if that's still true?

15 of the Craziest 'Game of Thrones' Tattoos

The Seasons 5 'Game of Thrones' Trailer Has Leaked

This content is created and maintained by a third party, and imported onto this page to help users provide their email addresses. You may be able to find more information about this and similar content at piano.io
Advertisement - Continue Reading Below
More From Culture
You *Need* to Follow the 'Bling Empire' Cast on IG
Watch the Trailer for the New 'Euphoria' Special
Advertisement - Continue Reading Below
We've Getting a Season 2 of 'Bridgerton'
New Drama Movies That Promise to Move You
The Sexiest New Movies of the Year
A Look Back at Princess Anne's Life in Photos
Where Is the Cast of 'Gilmore Girls' Now?
'The Bachelor' Is Back!
Who Is "Queen" Victoria on 'The Bachelor'?
Matt James' 'Bachelor' Cast: Everything We Know