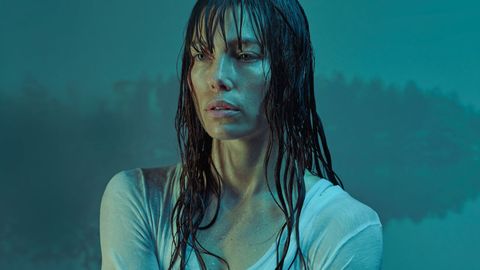 The latest must-binge TV series to hit Netflix is The Sinner starring Jessica Biel. It's a twisty-turny "why-dunnit" with a killer high concept: young mother Cora (Biel) is at the beach with her husband and son when something triggers her to carry out a completely unprovoked attack on a stranger, who she stabs to death in front of multiple witnesses.

After she's finished, she has no idea why.

It's an eight-part drama costarring Bill Pullman as the stressed-out cop who over-empathizes with Cora and is desperate to find out why the crime was committed before she's sent away for life.

As the show progresses, the plot thickens, and quite a lot of suspension of disbelief is required…

The Sinner will leave you with questions, questions like: If you literally couldn't remember two months of your life, would you not be in the least bit curious to find out what the hell happened? Yes, she thought she was a drug addict, but she has no memory of ever even taking drugs.

Similarly, if you had lost two months of your life, and then committed a murder seemingly without motive, would you not think to mention that to the police right off the bat, rather than saying you had no history of mental-health problems?

But these points we can put down to dramatic license. However, there's one issue in the show that just makes no sense—so much so that we're, frankly, quite gobsmacked that this got past the script editor and any number of other people who read the screenplay. This occurs in the final episode, so it really is a SPOILER…

It turns out all the memories that Cora had of Maddie (Danielle Burgess) were actually of her sister Phoebe (Nadia Alexander). Cora had taken her very sick sister to a bar that night, then to a party, where things turn dark, eventually resulting in Phoebe's accidental death at the hands of Frankie, the man Cora kills five year later. Cora is hit in the head with an ashtray and is unconscious.

Desperate to protect his son, Frankie's father buries Phoebe's body and initially plans to murder Cora, but at the last minute can't bring himself to do so, instead keeping her in a locked room jacked up to her eyeballs on heroin for two months until her head wound has healed and her memory is wiped.

At this point he drops her unconscious in the street to be found by a concerned citizen who takes her to rehab. She gets clean, is released and eventually begins her life again, with no memory of those months and her sister's death.

Why do Cora and Phoebe's parents not look for Phoebe after Cora has turned up in rehab?

Phoebe is 19 and has a heart condition as well as leukemia. She has been housebound her entire life and is doted on and fussed over by her mother, who takes every opportunity to take her sister's illness out on Cora.

When Cora and Phoebe go missing on Phoebe's 19th birthday, their mom thinks they've run away. So far, so logical—their mother overheard them talking about moving to Florida, which explains why she doesn't report them missing to the police that night. Fine.

But why, when two months later Cora turns up in rehab with no memory of where she's been, do her and Phoebe's folks never bother to try to find Phoebe? Even if Cora and Phoebe had run to Florida, would her parents not wonder where Phoebe is now that Cora is back? Why wouldn't they file a police report at this point? Especially given Cora can't remember anything.

Even more amazingly, why on earth do they actually tell Cora that Phoebe didn't go with her and actually died a month after she left? And how did that conversation even go down?

"Cora, you remember you ran off with your sister two months ago?"

"Oh. Well scratch that then, you didn't, she stayed here and is now dead."

And why were no alarm bells raised by the authorities? Surely doctors would have been expecting to see the very ill Phoebe for ongoing appointments—did they not wonder?

What about Phoebe's aunt? We learn that Cora stays with her after returning from rehab and being disowned by her parents, but would Aunt Margaret not have said, "Um Cora, you had a sister, any idea what went down with that?" And if Cora had said, "Nope, no idea," wouldn't she have thought, "Huh, probably better find out where my terminally ill niece has been for the last couple of months then?"

The family even has a shrine to Phoebe including an urn on the mantlepiece. What's that about? They tell the cops Phoebe has died, too—but you can't just do that can you? If it turned out Phoebe had been murdered (which, um, it kind of does), wouldn't they be the first to be suspected?

After all, who decides their daughter is dead and announces the fact without any info at all after just two months? And similarly, if they've done that and there's no funeral, wouldn't Aunt Margaret have thought that's a bit weird? It's been five years since the girls disappeared for the first time and no one even asked?

Intriguing show, but seriously, how did that slip through the net?