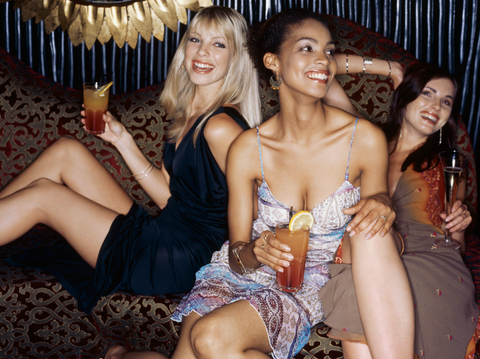 I was an addict. I mean, technically I'm still an addict, I just haven't had a drink or a drug since 2011. But if I were to drink a glass of champagne or take a line of cocaine, I know that I'd be off and running and that nothing would really be different. I'm not one of those people who can moderate or cut back. I can't just drink of couple beers and lay off the hard stuff. I can't put down the drugs and be fine with just drinks. I can't just drink on special occasions and I won't magically be able to drink socially after a few years of not imbibing. I'm a falling-down, blacking-out, drunk-dialing, life-ruining addict—and I'm okay with that.

The relatively short length of my drinking career should tell you all you need to know about how fast my use progressed—I picked up my first drink at 17, my first drug at 21, and got sober at 26. Clearly, despite how much I loved to imbibe (and how much I prided myself on my ability to drink large men under the table), I wasn't actually any good at drinking because I didn't even make it to my 30th birthday. When I ended up in rehab in my mid-20s, I was devastated. I couldn't believe that my life had brought me to that point, and the thought of never drinking again was terrifying. Sitting here almost four years later, I'm struck by the gratitude I now have for the path my addiction took—I was able to get sober at a young age, and I have my entire life in front of me to live healthily, productively, and soberly.

"I always wholeheartedly believed that the drinking was the only thing holding me together."

I always thought of myself as a party girl and often called myself a lush. There were jokes about being an alcoholic thrown around too. But I always wholeheartedly believed that the drinking was the only thing holding me together and anyone that had a problem with what I was doing just didn't know how to have any fun. Forget that my nights out always lasted until at least last call. Forget that my drinking always resulted in blackouts, fights with friends and partners, and waking up places I'd never seen before with no idea how I'd gotten there. Toward the end of college, I discovered cocaine, and I thought I'd found a solution to all those problems. Cocaine allowed me to drink without blacking out or falling down. Cocaine, I thought, gave me the power to drink the way I'd always wanted to. I felt invincible.

Thus began several years of increasingly long benders. Anyone in my life who suggested I might want to take a look at my drinking and drug use was immediately pushed away or cut out. I hung out in bars with no windows (you know, the ones where that same guy has been drinking on that same barstool since 1978), where everyone was doing what I was doing because it was the only place I didn't feel like an alien. I didn't understand people who could stop after two glasses of wine and who could drink without using cocaine. Hanging out with people like that only made me uncomfortably aware of the fact that maybe something wasn't right about what I was doing. So I buried my head in the sand and avoided "normal" drinkers and hung out with people "worse" than I was so that I didn't think I had a problem.

Meanwhile, my life was falling apart around me. I had chronic health problems from my drug use, I couldn't get out of bed when I wasn't drinking or using, and my interpersonal relationships were characterized by drama, chaos, cheating, gossiping, and fairweather friends. Eventually, after several cross-country moves, the loss of my housing, the loss of my employment, and the loss of my boyfriend, I hit some kind of bottom.

"I couldn't get out of bed when I wasn't drinking or using."

The funny thing is, there was nothing different about the day I decided to get sober. It was a day just like hundreds of days before it: It was 9 a.m., and I was still up from the night before, drinking wine from a magnum-size bottle and doing lines of cocaine. I hadn't showered in a few days, and I was sleeping at a friend's house after being kicked out of my apartment. I looked out the window at all the people walking to work and realized, in that moment, that not only did I not know how to do that but that I'd never known how to do that. It had always been like everyone else had received an instruction manual for life that no one had bothered to give me. I consider that a moment of grace.

My journey to recovery was the hardest thing I've ever done. It involved four months of rehab and six months of living in a sober house. It meant that I had to stop pretending that I had any idea how to run my life in a meaningful or successful way. It meant laying my demons out on the table and facing them, one-by-one. It meant becoming not an entirely different person, but a better version of myself. And it turned out that once I put down the drinks and the drugs, my life got better fast. In sobriety, I've gotten married, I'm stably employed, I have a 1-year-old daughter, and we bought a home. But the most incredible changes are not so obvious. I can't remember a day before I got sober that I woke up and didn't want to die. Today I have the gift of wanting to live life and wanting to live it without taking a drink or a drug to escape. I used to think that being an addict was a curse, but today I realize it's the greatest gift I've ever received.

I Lost 180 Pounds and Became a Man-Eater

Embracing the Frizz: How I Learned to Love My Crazy Hair