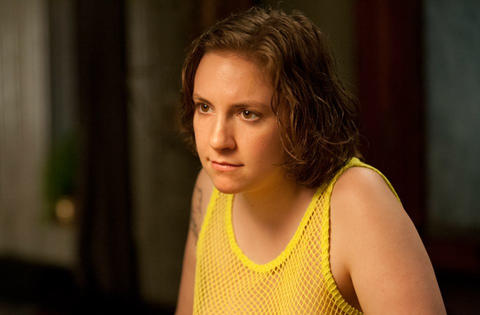 Over the weekend, Lena Dunham posted a photo of herself in lingerie on Instagram. "Why does she do this?" asked a friend of mine after chatting me the image. "She's always posing naked. I find it strange."

It's not that I think Lena Dunham has a perfect body. I don't even think there is such a thing. But I love looking at her, and I think that by showing her body the way she does, she's doing more to change attitudes about body image than any other woman in media.

For one thing, she's not objectifying herself. She's not breaking her body down into parts and saying, "This part of my body that most people think is gross is actually beautiful. Deal with it!" That sort of in-your-face body positivity is all over the Internet these days, but it's rarely convincing.

What's so amazing about Lena is how truly comfortable she seems to be with her own body. She doesn't need to add a body-positive hashtag to her Instagram to make a body-positive statement. The image itself is powerful enough and, I would argue, more powerful because it stands on its own.

What's so amazing about Lena is how truly comfortable she seems to be with her own body.

Lena's also not a beautiful woman in the conventional sense of the word, which makes her self-confidence all the more compelling. I mean, let's be real, it's hard to listen to a lingerie model talk about the importance of confidence and loving your body when she makes her living off her looks. Even if she happens to be a plus-size lingerie model, it still feels like she's pandering to the ugly people. But Lena's not a model. She makes her living off of her brilliant mind, not her stunning good looks, so when she says, "I love my body"—whether it is explicit or implicit—I believe her. And what's more, I'm right there with her.

I remember the first time I saw Lena Dunham's naked (or semi-naked) body. It was during the second season of Girls, when she wore that infamous yellow mesh tank top without a bra. For at least a week, her breasts seemed to be the only thing anyone could talk about.

At the time, I didn't follow the show. I had watched the first episode when it premiered on HBO and quickly decided it wasn't for me. I found all the characters on it repulsive; their whining, self-entitled angst represented everything I felt was wrong with my post-Sex-and-the-City generation, and it struck me that the majority of the people I knew who seemed to really enjoy the show were guilty of the same self-delusions and narcissism as the characters themselves.

Then Lena's character Hannah wore that see-through top and my mind began to change. Soon, screencaps of her outfit were flooding the Internet and although media coverage at the time was mixed, the people around me—fans and non-fans alike—seemed to be of one unanimous opinion: Lena Dunham's body is gross and no one should have to look at it.

Working in fashion, I've encountered a lot of body-shaming and even been guilty of it myself from time to time, especially early in my career when I worked exclusively with rail-thin runway models and objectified women on a daily basis as part of my job. But I was surprised to hear criticisms of Lena's body from women who claimed to be fans of the show. These were not women with "perfect bodies." It seemed especially hypocritical that they should praise the show for being fresh and new, and then condemn its lead actress for not conforming to contemporary standards of beauty or modesty.

It reminded me of when I first came out and how much I used to despise flamboyantly gay men. Of course, the problem wasn't really them. It was me. Years of being bullied and seeing media portrayals of hyper-masculine alpha males had brainwashed me into thinking that there was only one right way to be a man. But, over time, being surrounded as I am in New York City by so many loud and proud queens, I learned to see the courage and strength it takes to be a flamboyantly gay man in a straight world and that, more than anything else, helped me to accept myself for who I am.

Making this connection, I began to see Lena and her decision to show off her body differently. I admired her willingness to put herself out there as she is. To me, it was a powerful message of self-acceptance that rang truer than anything else I saw happening in popular culture at the time.

A couple weeks later, I actually sat down to watch another episode of Girls. It was the one where Lena's character Hannah hooks up with a hunky doctor played by Patrick Wilson and spends pretty much the entire episode either partially or fully nude. At first I was a little shocked by just how naked Lena's character Hannah was in the episode, but as I watched her unashamedly playing ping-pong with her paramour in nothing but a pair of cotton briefs, I found myself falling in love with her body not as a symbol of self-acceptance, but as something inherently strong and beautiful in its own right.

Over the next few days, I heard a lot of people complaining about how completely unrealistic that episode had been. Why on earth would a hottie like Patrick Wilson be attracted to a lump like Lena Dunham? But to me, it made sense. Although I am not physically attracted to women, watching that episode, I was so completely bowled over by Hannah's emotional and physical nakedness in those scenes. I could see her being able to land just about anyone she wanted. And at the end of the episode, I was actually sad to see her put her clothes back on because she had been so powerful without them. Suddenly, her naked body wasn't just something I appreciated for ideological reasons. It was something I actually wanted to look at.

I went to work the next day saying I would be happy if Lena Dunham never wore clothes again and I meant it. I loved her body then and I still do now.

This content is created and maintained by a third party, and imported onto this page to help users provide their email addresses. You may be able to find more information about this and similar content at piano.io
Advertisement - Continue Reading Below
More From Culture
'Squid Game' Season 2: Everything We Know
How to Join Marie Claire's Virtual Book Club
Advertisement - Continue Reading Below
Read an Excerpt From Lisa Jewell's Latest Mystery
Talk Race & Friendship With 'We Are Not Like Them'
'The Great British Baking Show' Is Back!
Let's Get to Know 'Sex Education' Newbie Dua Saleh
The 'Squid Game' Ending, Explained
'NPS' Director Just Teased a Second Season
Iconic Fall Movies to Get You in the Spirit
The "Berries and Cream" Trend on TikTok, Explained