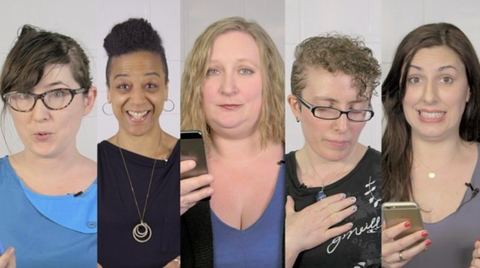 Megan Carpentier, Jessica Valenti, Rebecca Carroll, Sady Doyle, and Mary Hamilton are writers and editors at The Guardian. In their roles there, they oftentimes write about how women are harassed online. The video above features the five women reading their most recent abusive comments aloud.

The messages range from name-calling ("cold-hearted, emotionless, stony bitch") to threatening ("I will fuck your ass to death, you filthy fucking whore") to scary, rambling ridiculousness ("The Holocaust was an individual matter of choice of many Germans and pro-Nazis also abortion is you are a Nazi").

Some of the abuse is completely unrelated to ... anything. In response to merely posting a photo of her grandfather, Valenti was told to "kill yourself, cunt nugget." She is able to laugh in the face of this, but that comment and others bring to light the aggressive harassment most women face online.

It's hard to believe there are humans who actually take the time to write these things, but alas. There are small (small!) steps being taken to prevent this kind of abuse. Twitter has enabled a block feature to be used against violent harassment and Reddit has begun blocking certain subreddit threads despite complaints from users.

Tess Koman Senior Editor Tess Koman covers breaking (food) news, opinion pieces, and features on larger happenings in the food world.
Advertisement - Continue Reading Below
More From Culture
Jennifer Lawrence Will Star In a Netflix Film
Who From Bachelor Nation Will Be on the 'Games'?
Advertisement - Continue Reading Below
The Best Romantic Films of the Year (So Far)
An Investigation Into the Next 'Bachelorette'
Mindy Kaling & Priyanka Chopra Team Up
How the 'To All the Boys 2' Soundtrack Was Made
Does 'Bachelor's Madison Prewett Self-Eliminate?
How Much Does 'The Bachelor' Make?
Tales of a Hollywood Con Queen
Who Will Be on 'Bachelor in Paradise' in 2020?