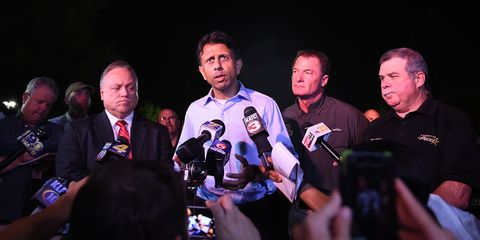 John Russell Houser, identified by police as the man who killed two women and injured nine people before shooting himself at a Louisiana screening of Trainwreck last night, reportedly had a history of mental illness and domestic violence, and actively spoke out against women.

According to the Washington Post, the 59-year-old was a frequent guest on TV talk shows, where he ranted against women's rights and empowerment.

Calvin Floyd, the former host of Rise and Shine in Columbus, Georgia, said Houser was an "entertaining" guest and "pretty much a radical Republican," who would go up against Democrats on timely news topics. He reportedly spoke out against women in the workplace and made incendiary comments about anyone involved in abortion practice.

"He was anti-abortion. The best I can recall, Rusty had an issue with feminine rights," Floyd said. "He was opposed to women having a say in anything. You could talk with him a few minutes, and you would know he had a high IQ but there was a lot missing with him."

The New York Daily News reports that Houser's criminal history includes a 2005 domestic violence complaint, and in 2008 court documents his family claimed he suffered from mental illness. Houser made violent threats against his family apparently because he disapproved of his daughter's marriage. His wife, who later filed for divorce, was compelled to remove all the guns from the house, and members of his family sought a temporary protection order.

So far, investigators have not identified a motive for the shooting. But the choice of movie (Amy Schumer's much-celebrated new feminist comedy) and Houser's history of aggression toward women would seem to point to something frighteningly sexist.