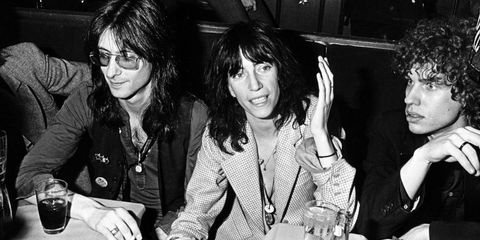 If you haven't read Patti Smith's incredible memoir, Just Kids, it's time to get on it—and not just because the story of a young Smith and her dearest friend, artist Robert Mapplethorpe, will make you laugh, cry, and feel everything in between. Deadline reports that the book has been picked up as a limited series to be aired on Showtime, which means that the iconic singer's rendering of '60s and '70s-era New York City will be appearing on your TV screen soon.

In Just Kids, Smith chronicles her journey from small town girl to struggling artist in gritty New York, as she and Mapplethorpe work their way from a seedy Brooklyn loft to the creative Mecca that was the Chelsea Hotel in the late '60s and early '70s—interacting with the likes of Andy Warhol, Janis Joplin, and many other now-iconic names along the way. David Nevins, president of Showtime, told Deadline that "every studio and producer in town" was after the rights for the book, which is unsurprising to say the least.

For those worried that the transition from book-to-film could skew or water down Smith's story, don't—Nevins also noted that Smith won't just be involved in the process, but will actually be doing the screenwriting herself, along with John Logan, the creator of Penny Dreadful. Now we await casting...

Victoria Dawson Hoff Associate Editor Victoria Hoff is the associate editor at ELLE.com, covering everything from fashion to beauty to wellness.
This content is created and maintained by a third party, and imported onto this page to help users provide their email addresses. You may be able to find more information about this and similar content at piano.io
Advertisement - Continue Reading Below
More From Culture
Your Favorite Teen Heartthrobs Then vs. Now
Halloween Costumes You Can Wear for Work Zooms
Advertisement - Continue Reading Below
'Empire Records' Helped Me Understand My Queerness
Iconic '90s Movies to Binge-Watch Right Now
HBO Is Giving Fans a Special 'Euphoria' Episode
Horror Movies Even Scaredy Cats Can Watch
Who's Who In 'The Haunting of Bly Manor'
Avengers Fans, Assemble: 'WandaVision' Is Coming
There Was a 'Friends' Reunion at the Emmy's
When Is 'Schitt's Creek' Coming to Netflix?