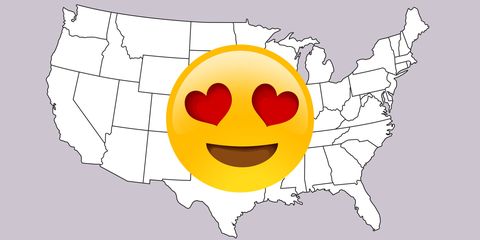 If you've been dying to know whether or not everyone in your state is using that prayer hands emoji as much as you are, now you can find out for sure.

The Daily Dot reports that SwiftKey, a company that makes keyboard software for mobile devices, looked at over 1 billion emoji to figure out how often each state was sending them to convey their true *feelings*.

Missouri ranked super highly for police emoji (what are you guys even doing over there?), Iowa was obsessed with the corn emoji, and New York apparently uses the Statue of Liberty emoji all the time. Go figure.

Other fun and also bizarre facts were that Vermont uses the poop emoji super often, Washington is using that wine glass emoji like there's no tomorrow, and Louisiana is using a lot of guns. Where does your state stack up?

Lane Moore Sex & Relationships Editor I'm Lane Moore, sex & relationships editor at Cosmopolitan.com.
Advertisement - Continue Reading Below
More From Culture
Jennifer Lawrence Will Star In a Netflix Film
Who From Bachelor Nation Will Be on the 'Games'?
Advertisement - Continue Reading Below
The Best Romantic Films of the Year (So Far)
An Investigation Into the Next 'Bachelorette'
Mindy Kaling & Priyanka Chopra Team Up
How the 'To All the Boys 2' Soundtrack Was Made
Does 'Bachelor's Madison Prewett Self-Eliminate?
How Much Does 'The Bachelor' Make?
Tales of a Hollywood Con Queen
Who Will Be on 'Bachelor in Paradise' in 2020?