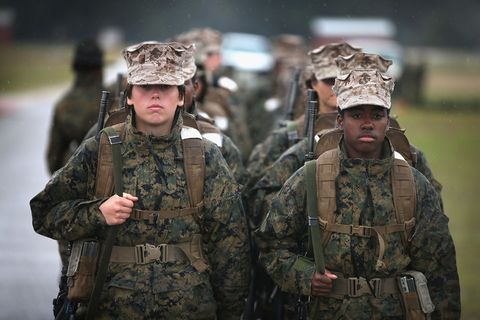 The so-called "brass ceiling" is finally being shattered. In a press conference Thursday afternoon, Defense Secretary Ash Carter announced that women will now be eligible for all combat jobs in the U.S. military.

Before this decision, about 10 percent of military positions remained closed to women; those positions included infantry, armor, reconnaissance, and some special operations units. But after three years of studying the effect of women in the armed forces, Carter decided to make a blanket rule to open every combat position to women, without exceptions, as long as they meet the standards.

Secretary Carter's decision echoes the recommendations of the heads of the Army, Air Force, and Navy, but it goes against the Marines, which recommended partial exceptions in some areas. According to the Washington Post, Gen. Joseph Dunford, then the head of the Marines, cited studies that found that all-male units performed better than mixed-gender ones on various tasks, and that women were injured more. However, that study was criticized for only considering averages, not individual performance. Gen. Dunford is now the chairman of the Joint Chiefs of Staff, making him the highest-ranking member of the U.S. military.

This year, the first women graduated from the highly competitive and grueling Army Ranger School. But the numbers of women who make it into these elite forces will likely continue to be small, since the physical standards are intense. All divisions of the military have a 30-day period to submit their plans to implement the new change.