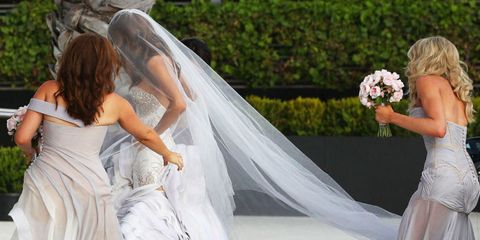 Last October, I found myself at a freezing cold airport in Detroit, Michigan, at 4 a.m. The only thing I had in my stomach was a piece (or two) of white almond buttercream cake. My body was covered in an itchy royal blue polyester fabric and was one fingernail scratch away from breaking out into a constellation of hives.

I had just left the dance floor of a wedding for which I'd been hired as a bridesmaid. The bride? A woman I had never met before in my life. She hired me because she didn't have very many close friends who had the time, disposable income, or the rah-rah personality to support her wedding adventure. One wine-fueled night, she Googled, "Can you hire a bridesmaid?"

Much to her surprise, she found my business, Bridesmaid for Hire.

From the outside, being a professional bridesmaid might seem glamorous. I get paid to wear a sometimes decent-looking dress, to have my face airbrushed with sweat-proof foundation, and to show off my club-like dance moves. Plus, there's an open bar, a slew of hot available groomsmen, and a three-course meal on the table. You're probably thinking it's as good of a time as Kevin Hart has in last year's movie The Wedding Ringer. Right?

But it's not really like that at all. I don't drink at weddings. I don't flirt at them either–that's mostly because my skills resemble those of a middle school girl. I don't even have the time to eat the food, though I do always find a way to eat the cake.

I never meant to become a bridesmaid for hire. It was a complete and total accident.

I was a bridesmaid over a half a dozen times for my friends before starting my business a year and a half ago. My life at that point consisted of talking to unpromising Tinder dates during the week and walking down the aisle holding a bundle of peonies on the weekend. I quickly became always the bridesmaid, never the ... well, you know how the saying goes.

Being a bridesmaid (not for hire) can be draining on your wallet, your nerves, your body, and, if you don't get a plus-one, your single-girl ego. You can find yourself doing things you would never do for another human being, like dancing with the bride's drunk uncle to make sure he doesn't fall over, or creating a bib out of pillowcases and feeding the bride with your fingers so she doesn't spill any salsa on her wedding dress. If you do it once, you instantly go from rookie to veteran, and even though once is enough, there's a good chance you'll have to do it another three or five times.

It seemed as though every time my phone rang, it would be another friend from college, camp, or work asking me the same question. I always answered without even a thought: Of course, I'd love to be your bridesmaid.

When you do something over and over again, you get all the kinks out. You learn what mistakes to avoid and how to get through any obstacles that are tossed your way. I became the MVP bridesmaid, the one who fought off premarital stress with my bridesmaid superpowers. I was always on time, used humor to diffuse bridal anxiety, and came prepared with a fanny pack survival kit (things I bought from the travel section of CVS).

I started to find that being a bridesmaid was something I enjoyed doing. In the end, the bride only wants one thing: a gal pal she can toss her arms around when times are tough. And I can be that gal.

One Friday night, after getting asked by two friends in one day to be a bridesmaid, my roommate blurted out, "You've become a professional at this."

That's all it took for me to think, Maybe she's right. Maybe I can somehow turn the tables and make back the thousands of dollars I have spent over the years on updos, chiffon dresses, shoes that match the dress, and bachelorette parties, where stripper after stripper in a leopard print thong has invaded my personal space.

I decided to test my idea out on Craigslist and offered my services to strangers who may need a professional bridesmaid.

Within days, I had hundreds of emails from brides around the world. People wanted to know if this was real and, if it was real, how much it cost. It wasn't just brides that wanted to hire me. I had mothers who wanted to give this service as a gift to their daughters. I had grooms saying they'd pay me however much I wanted so the bride wouldn't bother them with wedding planning. I had maids of honor asking if I could do the dirty work for them so they wouldn't have to figure out where to go clubbing for the bachelorette party, what kinds of games to play during the bridal shower, or what to write for the wedding speech they would soon have to give.

Since inventing this job, I've worked with over 40 brides doing some unimaginable things. I've taken off my bra right before walking down the aisle because the mother of the bride suddenly remembered she'd forgotten hers. I've served as a bodyguard, watching the doors of the catering hall like a 5-foot-7 hawk on behalf of a bride who had fired her maid-of-honor and was scared she was going to crash the party. Once, I even had to scoop animal droppings from the aisle of an outdoor wedding with my bare hands so the bride wouldn't walk down and stain the edges of her silk off-white dress with poop.

The strange thing about this job is the kind of relationship I form with my clients. In order to work together and work together well, we form a bond. Brides, maids of honor, and bridesmaids turn to me and tell me things that they wouldn't tell anyone else. They rely on me to become their on-call, on-the-spot therapist and their go-to person when they need advice on a challenge or a mind-boggling wedding or even personal situation. I've massaged brides' cold feet and often listened without judgment as they told me, and only me, that they were getting married for reasons other than love. By the end of the wedding, that relationship—that friendship—lasts even after the bridesmaid dress is sent to the dry cleaner (or rolled up in a ball in the back of my closet).

When I'm out at night or on a date, the most popular question I get is: Isn't it a sad thing if a bride has to hire you? But it's actually not sad at all. Not everyone has a group of friends that are reliable or able to be there for them on the wedding day. Or, they might have a group of friends who could be awesome bridesmaids, but they'd rather spare them from all of the dirty work and have a professional bridesmaid on-site to make sure the bridal party has everything they need. In the end, every bride deserves to make it through their wedding without having meltdowns and the strong wish that they could just run off and elope. That's all this business is. That's all I'm there to help do, is make every bride not hate their own wedding.

Along the way, I've learned what I would want to do when it's my turn to be the bride, but until that day happens, I'll continue being always the bridesmaid. At least now I'm getting paid for it.

Jen Glantz is a professional bridesmaid and the founder of Bridesmaid for Hire. She's the author of All My Friends Are Engaged and frequently wears old bridesmaid dresses to the grocery store and on first dates. Her forthcoming book, Always a Bridesmaid (For Hire), will be released this summer.