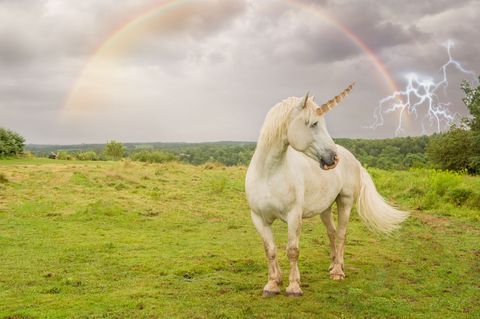 After years of believing unicorns were nothing more than mystical fairytale creatures, researchers just definitively proved that they did actually exist—though, not as pretty horses with pearly white manes, wings, and horns.

Thanks to a newly discovered skull fossil found in the Pavlodar region of Kazakhstan, we now know that the unicorn—or "Elasmotherium sibiricum"—roamed the planet roughly 29,000 years ago and looked more like a rhinoceros than a horse.

The study, published in the American Journal of Applied Sciences, also revealed that these unicorns stood about six feet tall, measured 15 feet long, and weighed around 8,000 pound—much larger than the horses we imagined them to be. The discovery is a total shock to scientists who initially thought they had gone extinct 350,000 years ago.

"Most likely, the south of Western Siberia was a [refuge], where this rhino had preserved the longest in comparison with the rest of the range," Tomsk State University scientist Andrei Shpanksy noted in the research.

Sadly, no magical flying abilities were discovered, but then again you never know what future studies will reveal...