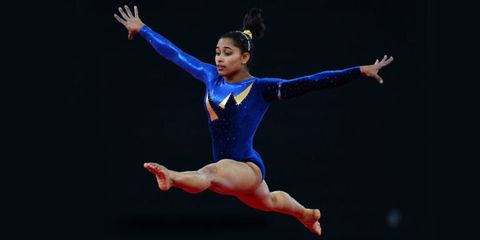 India hasn't sent a gymnast to the Olympics since 1964, when Debasis Mondal participated in the men's competitions. Now, Dipa Karmakar is making history as the country's first-ever woman to compete in gymnastics after qualifying for Rio earlier this week.

The 22-year-old has been breaking records on her way to gold. She is the first Indian female gymnast to win an international medal at the Commonwealth Games in Glasglow (in 2014) and is also one of only five women ever to nail the Produnova, a vault jump.

Dipa started gymnastics at the age of six in a gym that flooded often and was poorly equipped, so she would have to stack mats in place of using a vault. Now she's a local celebrity in her small town, Tripura, and is motivated by the idea of making her community proud. "I feel that I have to give more to my people. They have given me so much love, I feel the need to pay them back," she says in a BBC video. "Maybe competing for an Olympic medal would be it, so that they never forget that there was a girl named Dipa Karmakar, who gave them something that perhaps no one else could have given them."

Kristina Rodulfo Beauty Director Kristina Rodulfo is the Beauty Director of Women's Health—she oversees beauty coverage across print and digital and is an expert in product testing, identifying trends, and exploring the intersections of beauty, wellness, and culture.
Advertisement - Continue Reading Below
More From Culture
How Murtagh Dies in the Outlander Books
What Happened to John Finlay From 'Tiger King'?
Advertisement - Continue Reading Below
'Outlander' Season 5 Is Back to the Show We Love
The Best Cooking Shows on Netflix
The Wildest Reviews of Joe Exotic's Zoo
What Happened to Doc Antle from 'Tiger King'?
Is Joe Exotic Still in Jail?
What Happened to Dillon Passage from 'Tiger King'?
Julia Louis-Dreyfus Has All the, Uh, Right Answers
Just 41 Wildly Funny 'Tiger King' Tweets