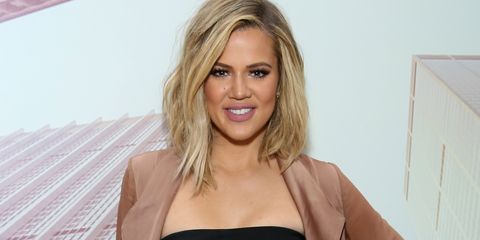 While Khloé Kardashian has been largely off social media since the Tristan Thompson cheating scandal broke (except to promote blog posts on her app), she is obviously aware of the stories being published—and she made that much clearer yesterday. Kardashian commented on E! News' Instagram about a source's claims that she is "living in her own personal hell" and that she's been leaning on Kourtney Kardashian. Kardashian chose to ignore the personal hell part but did give her sister a nice, jokey shoutout.

"Oh damn.... I hope I don't crush her by leaning on her. I love my little @kourtneykardash," she wrote. And that was it.

That full E! report detailed that Kardashian and Thompson "don't speak much about the situation, and Khloe feels like she is living in her own personal hell," via a source. "The only thing keeping her happy right now is [her baby daughter] True and the support from her family. Everyone is ready for her to come home and thinks it will give her more peace. Tristan has desperately been trying to keep Khloé happy and make their relationship work, but she thinks it's too far done."

Thompson, of course, became infamous when videos spread of him allegedly cheating on Kardashian days before she gave birth to her first child and their first daughter together, True Thompson. Kardashian remains in Cleveland with Thompson right now, though she's reportedly planning to take True with her to Los Angeles for Mother's Day.

Her sister Kim Kardashian was the first family member to speak publicly about the situation, describing what Thompson did to Kardashian as "so f*cked up."