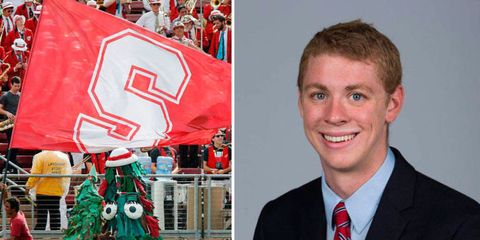 Last January, then-Stanford freshman Brock Turner sexually assaulted an unconscious woman behind a dumpster on campus. More than a year later, he was finally convicted of three felony counts of sexual assault and sentenced to six months in prison last Thursday. While Stanford largely kept quiet during the lengthy trial, on Monday, the university released a public statement regarding the case, stating that Stanford "takes the issue of sexual assault extremely seriously" and that they imposed "the harshest sanction that a university can impose on a student" by banning Turner from setting foot on campus less than two weeks after the assault took place.

You can read Stanford University's statement in its entirety below.

Stanford University did everything within its power to
assure that justice was served in this case, including an immediate
police investigation and referral to the Santa Clara County District
Attorney's Office for a successful prosecution.Stanford urges its students to do the right thing and intervene and
we are proud of our students for stopping this incident. Many other
student witnesses cooperated in the investigation. Once Stanford learned
the identity of the young woman involved, the university reached out
confidentially to offer her support and to tell her the steps we were
taking. In less than two weeks after the incident, Stanford had
conducted an investigation and banned Turner from setting foot on campus—as a student or otherwise. This is the harshest sanction that a
university can impose on a student.There has been a significant amount of misinformation circulating
about Stanford's role. In this case, Stanford University, its students,
its police and its staff members did everything they could. Stanford
University takes the issue of sexual assault extremely seriously and has
been a national leader in taking concrete steps to implement prevention
programs, to train students on the importance of bystander
intervention, to provide support to students who may experience sexual
assault and to assure that cases are handled fairly and justly.This was a horrible incident, and we understand the anger and deep
emotion it has generated. There is still much work to be done, not just
here, but everywhere, to create a culture that does not tolerate sexual violence in any form and a judicial system that deals appropriately with sexual assault cases.